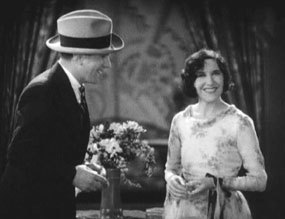 It is an eight-minute short featuring George and Gracie performing one of their comedy routines. In the short, Gracie, famous for being The Ditz, tries to convince George that she isn't ditzy at all. However, her odd answers to his questions greatly undermine that assertion.

Lambchops was filmed using the experimental Vitaphone sound-on-disc audio recording procedure. This process, in which a film's audio track was recorded onto a phonograph record, was eventually abandoned in favor of the technique that involved printing an optical audio track on the film—a "soundtrack".

No relation to Shari Lewis' Lamb Chop. Compare The Beau Brummels, a similar short film from the same era that recorded a vaudeville routine.