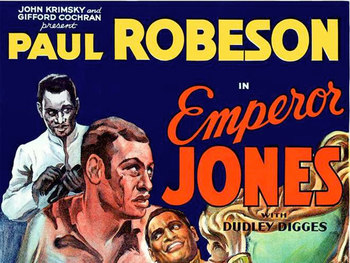 The Emperor Jones is a 1920 play by Eugene O'Neill.

Brutus Jones is an American black man who escaped prison, made his way to a merchant ship, and escaped the merchant ship, swimming to a Caribbean island. Once there, he establishes himself as the Emperor of the island, ruthlessly exploiting the natives, stealing their money and squirreling it away in offshore accounts. Jones is Genre Savvy enough to realize that the natives will eventually rise up against his tyranny and overthrow him, so he has a plan to escape through the jungle to the coast where he will board a ship. When the time comes, though, things don't go as planned. Except for the first scene and the last one, the play is a dramatic monologue from Jones as he escapes through the forest.

In 1933 the play was turned into an independent film, and a star vehicle for Paul Robeson. The movie is greatly expanded from the play, staging scenes that were only referred to as backstory in the play and inventing additional backstory for Jones.

None other than Billie Holiday can be spotted as an extra in the nightclub scene.