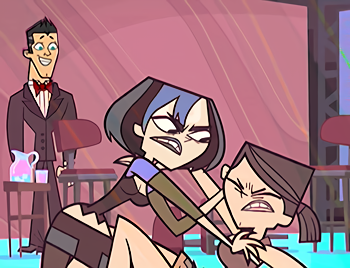 "I can't wait to see those kitties bare their claws on the red carpet! Mrow!"
Phoebe: Should we stop this?!
Joey: What? Are you out of your mind? Let's throw some Jell-O on them!
— Friends
Advertisement:

A battle between two or more female combatants that differs from the Designated Girl Fight only in that it's invoked for Fanservice and/or comedic purposes more than anything else. Though the label may be attached to any girl-fight, a true cat fight generally lacks finesse/combat skill. The combatants may take the fight seriously, as usually they aren’t trying to titillate an audience or amuse each other, but for whatever reason, heavy blows, complex throws, and joint locks are generally not used. A telltale real life sign that a cat fight is about to ensue is if a woman reaches up to take her earrings off before it actually starts, and as such talking about taking one's earrings off can be used as a verbal threat. Expect the combatants to seize and tear each other's clothing and/or hair. A staple of the Jiggle Show. Depictions that are Played for Laughs may be punctuated with a cat screech to drive the point home.

The more brutal or dramatic the fight, the less likely it is to be considered a cat fight. A good rule of thumb is that if weapons are involved (except for their own fingernails and the occasional handbag), it ain't this trope. A battle to the death between two women can be a cat fight if the framing makes it so, but that's exclusively the terrain of Black Comedy. On the other side of things, a cat fight can overlap with a Wimp Fight depending on the participants, but a cat fight is usually more vicious. If the fighters are more interested in hurting each other than staying out of harm's way, it's a cat fight.

Compare Designated Girl Fight, where females automatically square off in a combat situation that also involves males. In such cases, if only one male is involved, he will simply stand by and watch the two women beat each other senseless. If it's a more comedic series, several male characters may stop to watch the fight and Pass the Popcorn; bonus points if said males are enemies.

If two catgirls get into a fight, this Trope may apply, in which the name becomes very literal.

The less human the opponent is, of course, the less this trope applies. The Cute Monster Girl still does, though.

See also Wouldn't Hit a Girl, Girl-on-Girl Is Hot, Designated Girl Fight, Foe Romance Subtext, Fanservice Faux Fight, and especially Interplay of Sex and Violence. Just Add Mud to get Mud Wrestling. Compare Panty Fighter, where cat fights are the bread and butter, though they rarely degrade into "Rolling Around" pseudo-fights. Not related to the Cock Fight or the cartoon Big Ball of Violence.