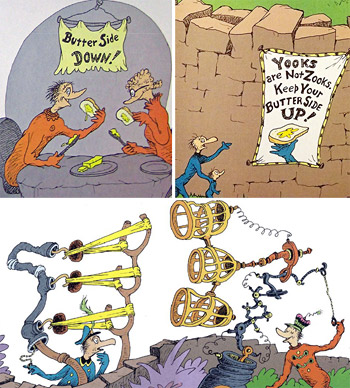 "Fight! Fight for the Butter Side Up! Do or die!"
Lister: Do you mean they had a war over whether the doughnut diner hats were red or blue?
Holly: Yeah. Most of them were killed fighting about that. It's daft really, innit?
Lister: You're not kidding. They were supposed to be green.
— Red Dwarf
Advertisement:

The protagonists encounter two (or more) groups who are in a deadly serious conflict over what the protagonists (and likely the audience) perceive to be a trivial and petty difference or issue. Like which end of the egg to crack first, or whether toast should be eaten butter side up or down, or even body features such as which half of their face is black and which is white. Or it can involve a situation that doesn't actually exist, such as one side believing that the other side plans to sap and impurify their precious bodily fluids.

This trope is often paired with An Aesop about how what we consider life-and-death, irreconcilable differences may be based on cultural norms and would seem just as petty from an outsider's perspective, and maybe we should reconsider our intolerance. If the writer wants to be extra Anvilicious about the message, expect the alien group to counter any perplexed queries about why they're willing to segregate, oppress, ostracise, or even kill each other over something so asinine with a retort like "humans kill each other over less". Like what pigment their skin has, whose parents they were born from, which phrases they pray with, what political party they support, and what gender they were born with. And the aliens killing each other over what color hat they wear are far above that kind of petty bickering. The fact that they're comparing what select groups of humans do (or did waaay back in human history) to their entire species being willing to kill each other over this stuff won't really be addressed.

Depending on how idealistic the story is, the protagonists may persuade the aliens/elves/mutants/pastry chefs to reconcile their differences or accept their differences and finally give living peacefully a shot. However, if it's going for the Downer Ending, then expect the hero's efforts to be for naught as the conflict escalates and they wipe each other out.

Most early instances of Fantastic Racism were based on groups at odds over superficial matters but if the groups have real and important differences, it can fall into a poor analogy that trivializes their conflict just because it's analogous to some real-world group of humans that are at odds for some mundane reason.

A Sub-Trope of Serious Business. Related to Humans Kill Wantonly and Fantastic Racism. See Felony Misdemeanor for when it's humans acting like this, and it doesn't (usually) end in war. Compare Pretext for War, where two sides seize upon any reason they can to go to war, without actually caring about the reason itself. When it's a mere domestic squabble, it might be a Toilet Seat Divorce. See also Blue-and-Orange Morality, which can potentially justify this trope. Sometimes, the real reason is the pride of the rival parties. If so, this would be Honor Before Reason.