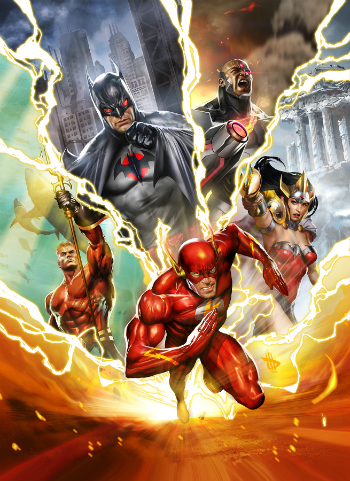 Everything you know will change in a flash...again...
"No matter how fast you run, you can't save everyone. Not the ones who matter to you."
— Professor Zoom
Advertisement:

Superman is nowhere to be found; in his place, Cyborg is the world's greatest hero. Likewise, Barry's enemy Captain Cold — or rather, Citizen Cold — has filled his spot as Central City's protector. Batman is uncharacteristically brutal. And most pressingly, Wonder Woman is at war with Aquaman with the former conquering the United Kingdom and the latter sinking the rest of Western Europe into the sea; if left unchecked the Amazons and Atlanteans will devastate the world.

The end of the movie also kicked off the DC Animated Movie Universe.

The exact moment Martha Wayne dies and the Joker is born.

The exact moment Martha Wayne dies and the Joker is born.