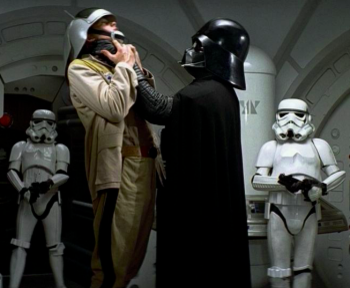 Bringing order to the galaxy.
Even if we have to choke it to death.
"Peace through tyranny."
— Megatron, Transformers
Advertisement:

The Dungeons & Dragons Character Alignment system originally defined characters' moral dispositions only on a Law/Chaos axis, with Law seen as usually involving moral goodness, and Chaos, evil. Eventually, Good/Evil was introduced as a separate parameter. One reason for this was the slightly odd but not all that rare case of characters who are clearly evil, but nevertheless organised, consistent, rule-abiding, or maybe even trustworthy and reasonable in their own limited way — in other words, Lawful Evil.

A Lawful Evil character is an evil character who either tries to impose or uphold a lawful system on others without regard for their wishes, and/or adheres to a particular code. They believe in order, but mostly because they believe it is the best way of realizing their evil wishes. They will obey the letter of the law, but not the spirit, and are usually very careful about giving their word. However, there is also the Knight Templar variant, who believes their rules actually make them the good guy — when they and their rules have in truth ended up at the lower end of the slippery slope to evil and tyranny.

Though Lawful Evil characters are often found in charge, these characters also make good henchmen or mooks. Though they lack any moral scruples that may impair their work, a cautious villain will find they respond well to concepts like "loyalty", "duty" and "honour". The caution, however, should be remembered, as these characters also respond poorly to Bad Bosses and Dirty Cowards,note not that a Dirty Coward who is themselves Lawful Evil is something unheard of, far from it, as well as simple incompetence that could lead them to deciding to either find a more worthy master, or take over "for the good of the cause".

Lawful Evil allows for a wide spectrum of character types to work with. Neutral Evil characters tend towards It's All About Me and Lack of Empathy for anyone else being willing to do anything to achieve, what will usually be, completely personal or selfish ends that at best would only incidentally benefit others. Chaotic Evil is even harder to portray as anything remotely sympathetic because even if they have a Freudian Excuse, they usually go so far off the deep end straight into the Moral Event Horizon territory that Freudian Excuse Is No Excuse. Lawful Evil on the other hand allows for many more facets with some interesting types being the Noble Demon who will fight honorably, Affably Evil characters who believe that doing bad things will lead to a better outcome, an Anti-Villain who believes that the cost of their morally questionable actions is worth the benefits to others with all of these types usually believing Even Evil Has Standards.

Lawful Evil tends to be the hardest type of evil to get rid of, especially when it's working within an established system. If the system itself is evil, then it's Inherent in the System, and thus the evil parts can't be changed without major upheaval or the complete destruction of the system. If the system is being used by evil individuals, that's even worse, as these types often perpetrate Loophole Abuse combined with Rules Lawyering to make it impossible to separate where the legal parts end and the illegal parts begin. If legally challenged, the Lawful Evil types will employ the most finely-tuned and detailed legal arguments you've ever heard to counter your loopholes, or even create Legalized Evil to specifically permit their brand of evil by law. Lastly, if the evil isn't part of a large system but rather as a group, it's still difficult to stop; those that are part of the group are generally doing it by following an ideal, and You Cannot Kill An Idea. So even if the current version of the group is stopped, it may not prevent a new version following the same ideals from emerging later on down the road.

All variants are likely to take advantage of Questionable Consent, pushing people into "agreements" and then pushing them to uphold their end of the "bargain".

Lawful Evil characters may not be motivated by anything but a paycheck. Many soldiers and henchmen working for an evil government or ruler fall into the "lawful evil" category by default. Being a genuinely committed member of a military organization makes one lawful by default, and if the government or ruler one works for is evil, then one naturally falls into the category of "lawful evil."

If you have a difficulty deciding which alignment an evil-aligned character belongs to, the main difference between Lawful Evil, Neutral Evil and Chaotic Evil is not their devotion to their evil wishes, but the methods they believe are best to realize it:

In a nutshell, these are a variety of evil characters who don't care if what they do is "heinous" or "horrible", but who will always follow certain rules.

Such characters are, for example:

A warlord who would kill anyone who threatens him — and, let's say, would always spare the enemies that can serve him; or someone who believes in playing by the story conventions; or a villain whose word is absolutely binding but would still kill a pregnant woman; or any kind of evil character that might commit mass genocide but for some reason Will Not Tell a Lie. Or a character who does, without flinching, anything their master orders them to do, anything, because their one rule is absolute obedience. A Lawful Evil character can also be an Omnicidal Maniac just as easily as Neutral Evil or Chaotic Evil can be; in such cases, they usually either hold Fantastic Racism towards all other living beings or they wish to impose a new order by annihilating everything and starting from scratch.

Remember, being Lawful does not imply at all that you have any moral standards, and any one of these character archetypes have just as much potential as a Neutral Evil or Chaotic Evil character to be truly despicable. Being Lawful may involve some kind of ethical values or moral codes, but they're more about abstract rules than actually caring about other people; alternatively, a lawful character may work within and abuse the rules. Lawful Evil is not always the "nicest" of the Evil alignments, though in individual cases the Lawfulness may make for a Noble Demon. It is just the most consistent and orderly. In short, an evil character who feels that the rules is what gives them strength or superiority. This includes upholding Evil as an ideal in and of itself, coupled with a sense of duty to promote it wherever possible and by any means. They're likely to have standards, but they're just as likely to have a warped moral code regardless. Notably, Hextor, the iconic god of Lawful Evil in Dungeons & Dragons is not sympathetic in the slightest. That being said, many, perhaps most evil characters who end up siding with heroes permanently without undergoing a Heel–Face Turn tend to be Lawful Evil, as they are the most likely of the evil alignments to work within the system; type 1s are particularly prone to this, due to their views on order.

Finally, it should be remembered that while many Lawful Evil types may value the law and may obey it in many cases, being Lawful Evil does not necessarily mean that the character will necessarily obey the actual laws of the land — many of them are fully prepared to commit illegal acts or to twist the laws to their own purposes, and even to annihilate entire systems or civilizations. Some may justify this by saying they are trying to create a superior lawful society; others may assume that their own personal code supersedes any loyalty to the authority of mere mortals; others still may think that the only law they obey is that of their own masters. No Lawful alignment is necessarily inclined to obey every law or any law.

When dealing with the examples of specific characters, remember that assigning an alignment to a character who doesn't come with one is pretty YMMV. If you've got a problem with a character being listed here, it probably belongs on the discussion page. There will be no Real Life examples under any circumstances; it just invites an Edit War. Plus, real people are far too complex and multi-dimensional to really be classified by such a straightforward alignment system.

The Devil may be pure evil, but even pure evil must adhere to a code.

The Devil may be pure evil, but even pure evil must adhere to a code.