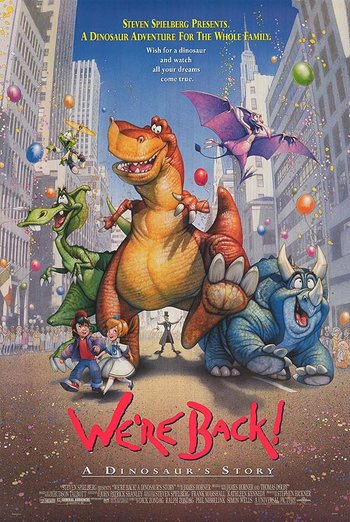 "Roll back the rock to the dawn of time and sing this song with me!"
— Rex
Advertisement:

We're Back! A Dinosaur's Story was Steven Spielberg’s other 1993 dinosaur movie (although he only executive-produced this animated feature), very, very loosely adapted from the 1987 children's book of the same name by Hudson Talbott, and produced by Spielberg's short-lived animation studio Amblimation.

It follows a quartet of dinosaurs who are given newfound intelligence by Mark Twain look-alike Captain Neweyes and travel to the "Middle Future" to fulfill the wishes of children in New York City to see real life dinosaurs. They meet up with two runaway children in their journey to the Museum of Natural History. But when panic breaks out, the heroes end up in an encounter with the frightening Professor Screweyes and his Eccentric Circus.

We're Back! A Dinosaur's Story

Louie and Cecilia hug the dinosaurs with this trope. Pretty blatant example, actually.

We're Back! A Dinosaur's Story

Louie and Cecilia hug the dinosaurs with this trope. Pretty blatant example, actually.