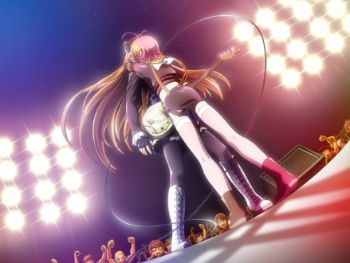 What a showstopper.
Advertisement:

The Hero and the Love Interest have just saved the day, and they've done so in a very large, very public place with a very noticeable audience—say, a theatre performance, or an orchestra recital. Having saved the day, our heroes are receiving a round of applause.

It may be ambiguous exactly what the audience is applauding for. After all, from their perspective all that's happened is that a couple of jokers have just burst in and completely stage-crashed what might have been a very interesting performance; usually it's because someone very prominent is present and has started applauding because he thinks what's happened is part of the performance or is a lot more entertaining than the scheduled show. Either way, they stand up and clap.

Then, swept up in the moment, the Hero and the Love Interest decide that, then and there, they'll confirm their developed feelings for each other by kissing in front of everyone. It's a major 'awww' moment, and usually to make it even more romantic, the applause increases in volume and intensity; ah, True Love, now this is worth applauding!

A subtrope of The Big Damn Kiss. See also Smooch of Victory. No relation to a KISS concert.