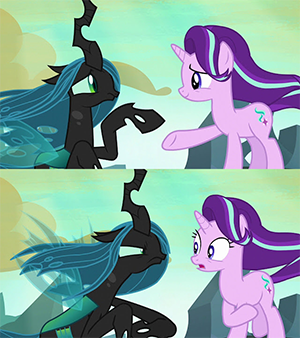 Thanks... but no thanks.
God: Alucard... you are forgiven. And if you are brave enough to accept it—
Alucard: Didn't ask; don't need it; go fuck yourself!
— Hellsing Ultimate Abridged
Advertisement:

When that offer of redemption just isn't good enough, some villains will outright reject the chance. Sure, some people will do whatever it takes to wash away their sins and join the side of good after a lifetime of committing unspeakable evil. But not this character. No, when Old Lady Redemption offers them that Last-Second Chance, they tell her "forget it" and steal her wallet for good measure.

This trope is the opposite of a Heel–Face Door-Slam, where the bad guy is actively seeking redemption, but is denied it (though the slam can be self-inflicted into this). For this trope, circumstances go out of their way to give someone a chance at mending their wicked ways, only for the offer to be firmly refused. It's the villain being told "you can turn away from evil," only for them to respond "I don't want to turn away."

Maybe the bad guy doesn't see themselves as the villain, and so doesn't think redemption is necessary. Maybe they realize their own wickedness, but think after all they've done, redemption is impossible, and therefore pointless to pursue. Maybe their motives for doing evil are so powerful that a guilty conscience is a small price to pay. Maybe they think that if people are going to treat them as the bad guy no matter what they do, they might as well go in with a full head of steam. Maybe they just have no morals and think that Evil Feels Good. Or rarely, they are honourable Anti-Villain with either Undying Loyalty toward their masters or possessing Villainous Valour.

Whatever the case, this is often a strong contender for the villain's Moral Event Horizon, the signal for the heroes to take the gloves off and give the villain what he now most definitely has coming to him.

Not to be confused with Reformed, but Rejected. Compare with Ignored Epiphany, where the villain has a moment of self-realization but dismisses it; I've Come Too Far, where the villain feels that they've already gone too far down the path of evil to turn around; Redemption Failure, where the villain makes a sincere effort to reform but isn't able to stick to it; and Beyond Redemption, where a hero decides that a villain isn't worth trying to reform anymore.

"It's Far Too Late For That"

Batman offers the Joker a chance to turn his life around only for the Joker to solemnly say that it is far too late.

"It's Far Too Late For That"

Batman offers the Joker a chance to turn his life around only for the Joker to solemnly say that it is far too late.