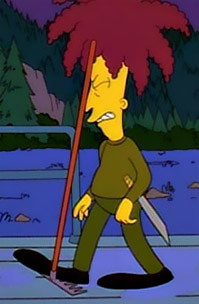 Buhhhuuhhuhuhuh...
Yahtzee: Last chance — I'll just keep tanking the rakes and maybe I'll somehow become really psychotically into being rake-faced just in time to be prepared for the sequel. And I'll be blatted in the face with a rake if that isn't kind of what happened!
— Zero Punctuation review of Dark Souls
Advertisement:

Common in cartoons, an innocuous-looking rake (or hoe, or shovel...) is lying on the ground. A character steps on it the wrong way and gets a face full of the stick part. Ouch.

Obviously Truth in Television for anyone who tried that. In real life, however, it usually results in a nosebleed or, if bad enough, a trip to the emergency room or the dentist — Looney Tunes jokes notwithstanding. And if an actual rake fails to rise and smack you, it may instead hurt your foot and/or break the rake.

After following the Simpsons to Terror Lake, Sideshow Bob finds the ground littered with rakes.

After following the Simpsons to Terror Lake, Sideshow Bob finds the ground littered with rakes.