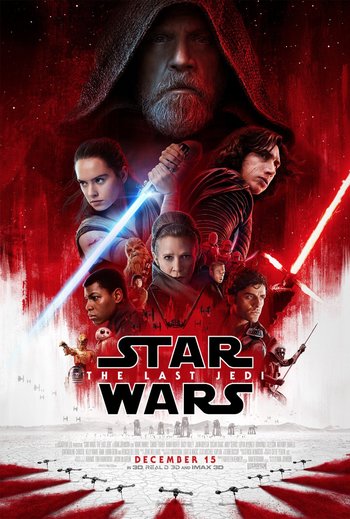 Luke Skywalker: It's time for the Jedi... to end.
The FIRST ORDER reigns.
Having decimated the peaceful
Republic, Supreme Leader Snoke
now deploys his merciless
legions to seize military
control of the galaxy.

Only General Leia Organa's
band of RESISTANCE fighters
stand against the rising tyranny,
certain that Jedi Master Luke
Skywalker will return and restore
a spark of hope to the fight.

But the Resistance has been exposed.
As the First Order speeds toward
the rebel base, the brave heroes
mount a desperate escape....
Advertisement:

Star Wars: The Last Jedi note Marketed as Star Wars: Episode VIII - The Last Jedi, or simply The Last Jedi is the sequel to The Force Awakens and the ninth live-action Star Wars film overall. It is directed and written by Rian Johnson, with a soundtrack by John Williams.

Picking up immediately after the events of The Force Awakens, the film follows the all-out war that has now broken out between the First Order and the remains of the New Republic led by General Leia's Resistance. On one side of the Galaxy, Leia, Vice Admiral Amilyn Holdo, Finn, Poe Dameron, BB-8 and Finn's newfound friend Rose Tico are desperately trying to escape the First Order's military advance. And on the other, Rey tries to convince a disillusioned Luke Skywalker to teach her in the ways of the Force, and help her and the Resistance stop both Luke's former pupil Kylo Ren and his dark master Snoke, the Supreme Leader of the First Order.

The Last Jedi was released on December 15, 2017. Early filming began briefly in September 2015 for a sequence in Ireland—specifically, Skellig Michael, where the previous movie's last scene took place. Filming began properly in February 2016, with Ireland, Bolivia, and Croatia as shooting locations.

The film is chronologically followed by The Rise of Skywalker and by Solo in production order.

open/close all folders
Tropes # to F

And then it's triple-subverted when it turns out that Rey stole the texts, meaning that Yoda merely destroyed an empty library just to troll Luke.

Tropes G to L
Tropes M to R
Tropes S to Z
"The Rebellion is reborn today. The war is just beginning. And I will not be the last Jedi."
Feedback

During Rey's first lesson, Luke tickles her with a leaf (pranking her that it's the Force) then slaps her with it when she doesn't catch the ruse.

During Rey's first lesson, Luke tickles her with a leaf (pranking her that it's the Force) then slaps her with it when she doesn't catch the ruse.