The Main Characters Do Everything 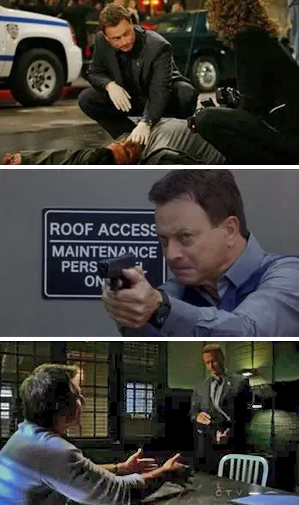 In Real Life, the various members of an organization have very well-defined jobs, which include a specific set of responsibilities and a limited amount of authority. Each member is restricted to performing only a specific set of activities. This system, called "departmentalization", allows the organization to train each member in one set of tasks, allows each member to focus on those tasks, and prevents members from stepping on each other's toes while doing their jobs. Departmentalization is a key aspect of many organizations (particularly large ones), including police, military, medical, governmental, educational and even commercial organizations.

In fiction, however, organizations are rarely depicted in this fashion, particularly when it comes to main characters who are members of said organization. Instead of having a restricted set of responsibilities and authority, The Main Characters Do Everything. They will often be seen doing whatever tasks are important to the story or interesting to watch, regardless of whether they would logically have the clearance, ability, or even the need to do those things themselves. Furthermore, any figures of authority in the organization will rarely show an interest in maintaining any departmentalized structure, often ordering our main characters to act outside conventional boundaries. In many cases, we'll see a lot of people milling about in the background doing nothing, because the Main Characters are already doing their job.

Whether the main characters have the skills necessary for the task is irrelevant. The point is that an organization described or even depicted as being departmentalized is showing no concern to maintain its own departments or hierarchy — allowing some of its members to do virtually anything they deem necessary — or even orders them to do so.

On some shows, the situation will be even more skewed: A main character is actually a figure of authority, but is frequently seen performing the jobs of his underlings — particularly putting himself into dangerous situations. Real-world Departmentalized organizations often go to extreme lengths to keep the higher-ups out of danger, letting expendables do the dirty work. In fact, superiors are often explicitly discouraged from taking a "hands-on" approach entirely (even when they are more qualified for a task than their underlings), whereas in fiction this notion seems to be almost non-existent.

This trope usually happens because writers are faced with a tough dilemma: If our main characters were realistically limited to the scope of their own jobs, things could get very boring very quickly. How interesting would it be to watch The Captain pushing papers and managing his crew all day? How many interesting stories can revolve around watching the doctor diagnosing patients in his little office? note There are also Real Life reasons for a TV show to do this — you're already paying your main cast top-dollar per episode. They also want to be on screen — they did boring roles for years before landing this gig. The audience notices if these characters aren't around. Other shows would like to woo your actors away for their own casts. You have to put them on when you can to make sure you are getting your money's worth and your actors and fans are happy. The easiest way to do it is by using this trope. As for hiring lesser-known actors to do those roles, they need to be paid, too... and if they're on the show every week they'll want better pay and higher billing.

Of course, one solution would be to add tons of characters to follow around, each with his own little job. Some writers prefer this, and some even pull it off rather well — but the multitude of characters can still potentially confuse the audience (and it can also get expensive hiring more and more actors for bit roles). Another solution is to focus only on the most interesting jobs in the organization, and have everything else be done off-screen (as seen in the many Police Procedural aversions listed below) — but again requires very good writing skills and/or very interesting stories to fit this specific format.

Instead, most writers prefer increasing the scope of the Main Character's job far beyond realistic limits, or even impose no limits whatsoever. So now, the Captain goes out on dangerous away-missions, the general practitioner goes into surgery, and the forensic analyst does interrogations and arrests — whatever serves the drama. The break from realism is brushed under the carpet, in the hope that the resulting drama will be gripping enough to keep the viewers engaged.

It is important to note that this trope is only a tool, often being considered one of the many Acceptable Breaks from Reality. It helps reduce the introduction of Flat Characters that carry out the menial tasks, and keeps the main characters in focus throughout the episode.

A show can be said to use this trope if it fits one or more of the following definitions:

Note that the trope can be (and sometimes is) justified simply by providing a logical reason why any of the above should occur. Several such examples are listed below. Unfortunately, many shows offer no such explanation.

Finally, note that this trope is rarely confined to a single main character. It's usually a group of characters who, between them, seem to carry out every possible task in the show. You'll never see the extras doing anything important, it's always one of the Main Characters who gets the task. Some shows make this even more complicated by having one main character doing the job of another main character, because that other main character is off doing some other job that isn't within their remit. In the worst case scenario, this cascades on and on until all of the main characters are doing something they aren't supposed to do.

It's Up to You is a specialized form of this trope, where the player character in a video game Does Everything.

This trope is closely related to Ghost Extras, since the two tropes are almost always played together. Expect the main character(s) to be an Omnidisciplinary Scientist, Super Doc, or Do-Anything Soldier (it's usually an excuse to let him Do Everything). One Riot, One Ranger is an extreme application of the trope. Command Roster practically guarantees the trope. Also connected to Red Shirt; if you're in a series where The Main Characters Do Everything, and suddenly you see someone else participating in the main action, they might be there only for purposes of a sudden death.

Somewhat related to Composite Character, where after adaptation a single character has to carry out tasks that were originally carried out by two or more separate characters.

Compare with Einstein Sue and The Only One, where our main characters do everything because all other characters are either incompetent, or just never happen to be around when they're needed. Also compare Always on Duty and Economy Cast, where the main characters actually do stick to their specialties, but it seems that they're the only ones who do anything when there really should be others available.

Silver Quill voices the crux of the main issue Fans have with Characters like The Royal Sisters, Cadence, and Shining Armor not being allowed to participate in directly fighting against the villains and threats to boost Twilight Sparkles popularity with the audience.

Silver Quill voices the crux of the main issue Fans have with Characters like The Royal Sisters, Cadence, and Shining Armor not being allowed to participate in directly fighting against the villains and threats to boost Twilight Sparkles popularity with the audience.