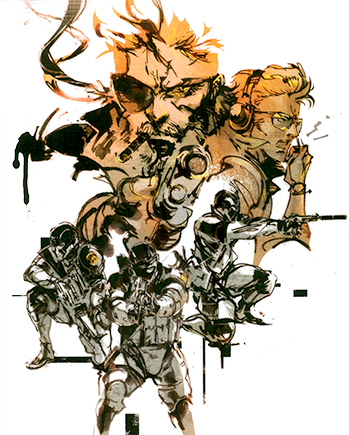 "But what better place for us than this? It is our only home. Our Heaven... and our Hell. This... is Outer Heaven."
"Peace amongst men living alongside one another is not a natural state.
On the contrary, the natural state of man is that of war.
War manifested not only by open hostilities,
but also by the constant threat of hostility.
Peace, therefore, is a state that must be established by law."
— Immanuel Kant, Perpetual Peace, Chapter 2.
Advertisement:

Ten years have passed since Operation Snake Eater. Snake, a.k.a. Big Boss, has left the CIA and created a mercenary army, Militaires Sans Frontières, as a home for soldiers like him. On a dark and stormy night, he is approached by representatives of the Costa Rican government requesting his help in driving out a mysterious armed force occupying a remote region of their country. Kazuhira Miller, Snake's second-in-command, encourages Snake to take the job; Snake, however, is wary of the offer. This all changes when one of the representatives presents Snake with a tape recording containing information of personal interest to him, and six days later, MSF moves into action...

Borrowing elements from the hugely popular Monster Hunter games (including the monsters) and with a greater emphasis on succinct mission structure and plot, as the player captures more enemies and rescue allies, their army and arsenal grow from a handful of guys on an oil rig to a huge base with fantastic weapons. At the time of its release, it was the biggest game in the series in terms of sheer content, featuring a much more balanced Story-to-Gameplay Ratio. Additionally, for the first time in the series, the game could be played cooperatively in addition to single-player.

Despite its origins as a portable game, Kojima Productions saw fit to release Peace Walker on home consoles as well, bringing the game to a much wider audience with an upgraded resolution of 720p (compared to the original's 272p). In 2011, Metal Gear Solid: Peace Walker HD Edition was released for the PlayStation 3 and Xbox 360, sold as a standalone game in Japan and included with the Metal Gear Solid: HD Collection overseas (although, the Xbox 360 version of the HD Collection has Peace Walker on a separate disc due to the console using DVD instead of Blu-ray as its storage media).

Peace Walker has received a strong critical response as well as approval by the Metal Gear fanbase. Being the first game to succeed the series "finale" Metal Gear Solid 4 yet taking place earlier in the series continuity, it adds new gameplay and fleshes out the Metal Gear universe while delivering more of the series' well known quirky humor and political commentary.

Warning: This game may make you want to visit Costa Rica. Not to be confused with Metal Walker.

Big Boss vs The Boss

Big Boss vs The Boss