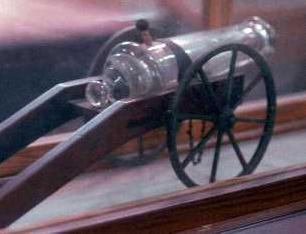 Frail, but deadly.
"I'm the caster, y'know! It's like I'm a cannon made out of glass. Like a...y'know, like a dainty figurine so ornately decorated you can't imagine how something so fragile manages to exist in this brutal, ugly world...and it makes you weep."
— Black Mage, 8-Bit Theater
Advertisement:

In short: they can dish it out, but they can't take it. The Glass Cannon is characterized by insane attack power coupled with pathetic defensive ability.

Occasionally referred to as a Glass Dragon, Glass Cannons are prevalent in RPGs and fighting games, as the cast needs to be big enough that "takes hits like a chump" becomes a viable character trait. In RPGs, the Glass Cannon tends to be a Squishy Wizard. Not all Squishy Wizards are completely Glass Cannon, though. A Squishy Wizard still can have decent or good magical defense but abysmal physical defense (and the aforementioned good magical defense may be undermined by low hit points), and likewise, a brawler may have good physical defense but poor magical defense (though physically-oriented units are more likely to have a good amount of hit points). Artillery or archer units in Real-Time Strategy and Turn-Based Strategy games also tend to have this trait, as they're meant to be far away from combat, or at least in the back of the formation. If a boss happens to be a Glass Cannon, that's a Rush Boss.

This can even apply in real life. Some military weapons and vehicles can deal a lot of damage, but they're easily destroyed if they take a hit. Athletes who play contact sports can also count if they run up really good statistics but are also easily injured.

Make the Glass Cannon incapable of taking any punishment at all and you've got a One-Hit-Point Wonder. A matchup between two of these usually results in Rocket-Tag Gameplay. When the enemy tries to take out the Glass Cannon as fast as possible, it's Shoot the Mage First. They may have a Full Health Bonus ability as another way to encourage them to avoid getting hit.

The Glass Cannon is very much a Red Oni method. Since it promotes aggressive, reckless tactics over patience and endurance. Glass Cannons can very easily lose their cool, since they're taking a lot of damage leading to a beserker-like rage which, in their case, won't last very long before they're defeated.

This trope is one of the most flexibles of the Competitive Balance:

Not to be confused with actual cannons made of glass, which would be its Trope Namer. For those, see Glass Weapon.

He is less durable without his samurai armor, needing only one Deathblow to defeat in both instances where you fight him. Victory can occur in just a few seconds. However, Sekiro's own posture accumulates rapidly under Genichiro's increased aggression, and the general has new moves that will demolish fully-upgraded healthbars in individual swings.

Alternative Title(s): All Offense No Defense

He is less durable without his samurai armor, needing only one Deathblow to defeat in both instances where you fight him. Victory can occur in just a few seconds. However, Sekiro's own posture accumulates rapidly under Genichiro's increased aggression, and the general has new moves that will demolish fully-upgraded healthbars in individual swings.