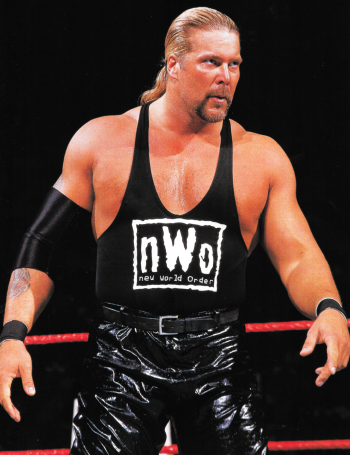 "This is where the big boys play, huh? Look at the adjective: 'play!'. We ain't here to play."
—Nash on his debut on WCW Monday Nitro
Advertisement:

Like most wrestling stars to come out of the nineties, Nash cut his teeth in WCW as a jobber under the names Master Blaster, Oz, and Vinnie Vegas. After 3 years of this, he was scooped up by Shawn Michaels and signed a contract with WWF, where he was given the gimmick of Diesel, a long-haired cocky biker thug.note Albeit his entrance music were truck engine noises along with loud horns. He started out as Michaels' bodyguard, and in 1994, Nash won all three titles comprising the WWF Triple Crown (Intercontinental, Tag Team,note With Michaels and WWF Championships, in that order), before leaving for WCW in 1996.

In WCW, Nash joined his friend Scott Hall in becoming "The Outsiders", which would evolve into the wildly-successful nWo angle after being joined by Hulk Hogan. The group dominated the ratings for two years and rocketed WCW into becoming the world's most profitable wrestling company, with Nash becoming a four-time WCW World Heavyweight Champion and a nine-time world tag team champion. But in 1999 it all started to go wrong: Nash becoming booker for the company coincided with it hatching the most ridiculous and camp storylines wrestling had yet seen (until Vince Russo came along), which all seemed to be designed to push Nash, Hall, and their small circle of friends into the spotlight at the expense of homegrown talent.

After the company was bought up by WWE, Nash waited out his contract and was rehired by them alongside Hall and Hogan in 2002, until he was finally released in 2003. He would go to TNA in 2004 and, after Hogan followed suit in 2010, attempted to reboot the nWo angle. Nash remained with the company until 2011, and has made semi-regular appearances on WWE programming ever since. He was inducted into their Hall of Fame in 2015.

Nash was a member of The Kliq, an influential backstage group that included Michaels, Hall, Triple H and Sean Waltman.

Nash is also an actor. He has appeared in roles such as Super-Shredder in Teenage Mutant Ninja Turtles II: The Secret of the Ooze, The Russian in The Punisher, a bodyguard in John Wick, Bass Armstrong (himself a Hogan parody) in DOA: Dead or Alive and Gus in Dog. You may know him best as Tarzan from Magic Mike.

"Look at the adjective: Trope"