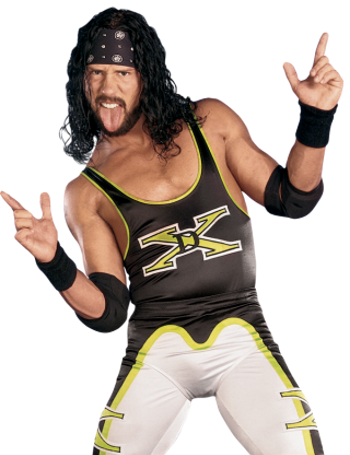 Sean Michael Waltman (born July 13, 1972) is an American professional wrestler who has wrestled for WWE and WCW under the names X-Pac (WWE), The 1-2-3 Kid (WWE), and Syxx (WCW). He is a former WWE European Champion (x2), a former WWE Light-Heavyweight Champion (x2), a former WWE Tag Team Champion (x4), and a former WCW Cruiserweight Champion. However, despite his accomplishments in the ring, he is, unfortunately, best known as the Trope Namer/Codifier for the term "X-Pac Heat." Regardless of his X-Pac Heat, however, he was inducted into the WWE Hall of Fame in 2019 as part of D-Generation X's group induction and inducted again in 2020 as part of the New World Order, making him the first person to be inducted two years in a row.