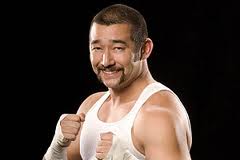 "Call me All-American, I'm a redneck through and through
Got my hat, my pickup truck, and my hound dog he's named Boo
People don't understand my way of life
I'm gonna have to punch someone tonight"
Advertisement:

Trained by Curtis "The Cat" Hughes and Paul Orndorff, James Carson Yun (b. May 13, 1981) is an American retired Professional Wrestler, actor and entrepreneur from Austell, Georgia known for his work in WCW, All Japan Pro Wrestling and WWE. He debuted in 1999 and had his first significant role as a member of The Jung Dragons as "Yang", with Kaz Hayashi and Jamie-San (Jamie Noble under a mask due to being the team's Token White). They had a feud with 3-Count (Shane Helms, Shannon Moore and Evan Karagias). WWE picked up his contract after buying WCW and sent him to the Heartland Wrestling Association in Ohio but released him in January 2002. He switched to TNA, debuting on TNA #1, June 19, 2002, as part of The Flying Elvises with Jorge Estrada and Sonny Siaki in a win over AJ Styles, Jerry Lynn and Low Ki. He left after The Spanish Announce Team (Jose Maximo, Joel Maximo and The Amazing Red) defeated him, Shark Boy and David Young at TNA #29 on January 22, 2003. He went to WWE where he was renamed Akio and made one of Yoshihiro Tajiri's bodyguards. That ran its course, and in 2006 he was reintroduced as Jimmy Wang Yang, "SmackDown's resident redneck," as Michael Cole called him. He has also wrestled for Pro Wrestling ZERO1, Fighting Opera HUSTLE, Juggalo Championship Wrestling, MLW and numerous others.

"I'm gonna have to trope someone tonight":