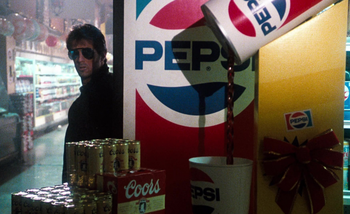 Makes you want an ice cold Coca-Cola, doesn’t it?
"Nice of Wal-Mart to provide these Wal-Mart beverages in return for us saying 'Wal-Mart' so many times."
— Bugs Bunny, Looney Tunes: Back in Action
Advertisement:

Otherwise known as a "plug" or "writing commercials right into a show". The practice of prominently displaying or talking about a recognizable product in a program, in exchange for some consideration from the manufacturer, usually monetary. The manufacturer hopes to cause The Red Stapler effect, but it far more often results in snarky comments from the peanut gallery.

This trope isn't always invoked for mercenary reasons; many times it's just more realistic for someone to be in a shopping mall and walk past actual brands rather than unnamed Brand X. Or a world set 20 Minutes into the Future won't have suddenly lost the culture of billboard advertisements and product logos which defines the modern day. Real brands add veritas in these cases. Plus some filmmakers striving for as much realism as possible would rather use recognizable products than Brand X. On the other hand, even when it begins with the best intentions, contractual obligations to have the dialogue actually mention a placed product can easily turn malignant.

The least subtle version of this kind of embedded advertising is the Enforced Plug, which, in America, was common in early television (when the commercials literally were considered more important than the programming) and still is in radio.

With reruns, DVD and downloads, this can be the gift that keeps on giving for advertisers. After all, the commercials that aired on the original broadcast aren't retained in any of these. Product placement is, at least most of the time, though there have been instances of company logos being digitally blurred out for things such as television broadcasts of movies, if the sponsoring company didn't pay for the additional product placement in these broadcasts. It can also backfire in the case of a 20 Minutes into the Future production that happens to feature a product or brand that in real life ceased to exist by the time the production was set (a prime example being Pan Am, an airline featured prominently in the 1968 film 2001: A Space Odyssey, which ceased to exist by the time the real 2001 rolled around. note Although the brand was resurrected by several short-lived airlines, one of which was active in 2001, and a railway, the original world-famous airline went bankrupt in 1991.)

This can occasionally be Truth in Television, since people who enjoy a given product are naturally more likely to say good things about it and/or recommend it to their friends — and, of course, it's not uncommon to name-drop brands in day-to-day conversation (see the genericizing of Coke and Band-Aid, despite the latter's best efforts). It starts to get a little gratuitous if everyone in the work, good or bad, drinks the same brand of beer, though... and if a character refers to a product exclusively by its "official" name (it's not just a phone, it's not just an iPhone, it's the iPhone 12 Pro Max, thank you very much), all bets are off.

When adding examples, there's something to remember: Not all products visible in television or film are the result of product placement. For a work to qualify, there must be some indication that a deal was made between the brand and the studio, such as a "product placement considered by (Insert Brand Here)" in the end credits of a film/ show, a "P" logo placed at the start of the show (which is legally required in the UK), or some form of Word of God to back the claim up. After all, sometimes background logos are just unavoidable, or producers just choose a product for other reasons, and there's no exchange of money with the manufacturer in those cases (One notable example, 2001: A Space Odyssey, which used Product Placement for a rather specific reason: To make the future presented much more plausible to audiences in 1968), so don't assume that if a brand logo is showing that it must be paid for by the studio, there's a good chance no deal existed to begin with if it wasn't declared in some way.

Some viewers find product placement to be more offensive than sex, violence or the Seven Dirty Words, to the point where parental movie review websites often make a point of singling out films with excessive (or, sometimes, simply any) recognizable brands or products, especially children's works, whose target audience are vulnerable to unhealthy advertising.

For two particular examples, see Everybody Owns a Ford and its computer equivalent, Everyone Owns a Mac.

Compare Merchandise-Driven, Product-Promotion Parade, and Advertisement Game. Contrast with Brand X or Product Displacement. When a character from a show is endorsing the product, it's Celebrity Endorsement. See Parody Product Placement when it is done in an extremely over-the-top, self-aware way, and Destroy the Product Placement when the product is damaged, broken or destroyed. See Console Cameo for when the product is required to see the placement in the first place.

History — brought to you by delicious Brand XTM!

The practice began in the early days of American radio, with companies lending their names to title programs as a way for funding them. The Secretary of Commerce, which licensed radio stations during most of the 1920s, prohibited direct advertising. By 1930, advertising was permitted, but the practice remained for years. Slowly the shows set themselves apart from the ads, with announcers shilling for a product, while the characters had an adventure. Product placement also was frequent during the early days of television, with characters shilling for their sponsor at the end of an episode. However, a quiz show scandal in 1958 forced networks to control their programs, instead of the sponsors. Product placement transitioned to movies until the mid-1990s, when TV regulators relaxed the rules against products appearing outside of ad breaks.

It's still prohibited in Canada. A dishwasher manufacturer can recommend a certain brand of tablets, but the host of a cleaning show can't — in fact, they can't even show the brand name on screen.

In the movie The Great Man a radio personality mentions name-brand products on the air for personal gain. The movie was made in 1956, making this Older Than They Think. Indeed, there is (possibly apocryphal) evidence that suggests that merchants in Ancient Greece would attempt to bribe playwrights at drama festivals for favorable mentions of items in their plays. Someone epically telling the audience how great figs are could be quite good for business.

This trope is often parodied; for that, see Parody Product Placement.

Examples — a large variety as only Heinz® can bring it to you!