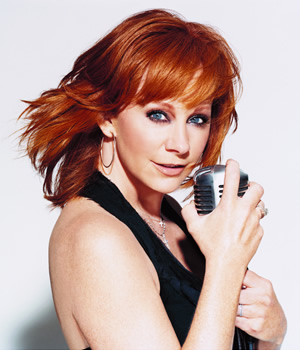 "The baby girl without a chance
A victim of circumstance
The one who oughta give up but she's just too hard-headed
A single mom who works two jobs
Who loves her kids and never stops
With gentle hands and the heart of a fighter
I'm a survivor!"
- "I'm a Survivor", also the theme song for the sitcom Reba
Country Music's reigning queen for the better part of two decades, Oklahoman Reba Nell McEntire (born March 28, 1955 in McAlester, Oklahoma) has done it all. In her career, she has racked up more than thirty #1 hits (out of more than 80 singles overall) - more than any other female country music artist - and had the first multi-platinum album by a female country act. She is known for her twangy voice, bright red hair and strong, no-nonsense material. Her accolades include two Grammys (for "Whoever's in New England" and "Does He Love You"), as well as several trophies from the two major country music award associations, the Academy of Country Music and Country Music Association. Although her radio hits were fewer and further between in the 2000s, she came back in full force in late 2009-early 2010 with "Consider Me Gone," the biggest hit of her career.
Advertisement:

Reba has also dabbled in acting a few times, including a successful six season run in the Sitcom Reba and the role of Annie Oakley in the 2001 Broadway musical Annie Get Your Gun. She also played Heather Gummer, Burt's wife in the first Tremors. Come 2012, she's starring in another sitcom, Malibu Country, with nearly the same premise as her first sitcom.

To cap it all off, Reba was named a Country Music Hall of Fame inductee in 2011.