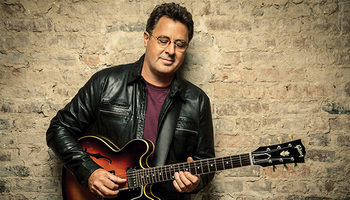 Vincent Grant Gill (born April 12, 1957) is an American Country Music artist known for his silky tenor voice, multifaceted style, and instrumental prowess on both guitar and mandolin. He has a reputation for being one of the kindest people in Nashville.
Advertisement:

Gill began his career in the 1970s in Bluegrass bands before joining the country rock band Pure Prairie League in 1979 as a singer and guitarist. The Gill-sung "Let Me Love You Tonight" became the band's biggest hit, reaching #1 on the Billboard Adult Contemporary chart and #10 on the Hot 100 in 1980. The next year he left to join Rodney Crowell's backing band, The Cherry Bombs, then signed as a solo act with RCA Records in 1983, putting out three modestly successful albums: Turn Me Loose, The Things That Matter, and The Way Back Home. After transferring to MCA in 1989, Gill's career kicked into motion: his first MCA disc produced the #2 hit "When I Call Your Name", with his next four albums each producing several Top 10 hits (including four number 1 hits from I Still Believe in You). It was at MCA that Gill developed his signature style, blending mainstream country and bluegrass, often with a high emphasis on ballads.

Although Gill's fortunes faded in the late 1990s, he continues to record to this day. He can frequently be heard singing backing vocals on just about everything and joined Eagles in 2017 along with Glenn Frey's son Deacon after Frey's death the year before.