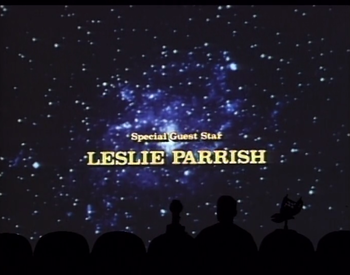 "Special but unknown guest star!"note "How can you have a guest star in a movie?"
"Ladies and Gentlemen, Mister Burt Bacharach!"
— Austin Powers
Advertisement:

A star brought into a series, to star as himself or a character very similar to one he is famous for playing. In American television, this is common during Sweeps. Especially likely on a Very Special Episode. The technical term is "Stunt Casting." In a sitcom, always accompanied by canned cheering and applause. Pioneered on I Love Lucy.

See also: The Cameo, Celebrity Star, As Himself, Character as Himself, Celebrity Edition. Guest Fighter is a special version of this that only applies to video games (especially Fighting Games), and "Sesame Street" Cred is for celebrities who guest star in shows aimed at children.

May lead to Gushing About Guest Stars if they play themselves in their appearance.