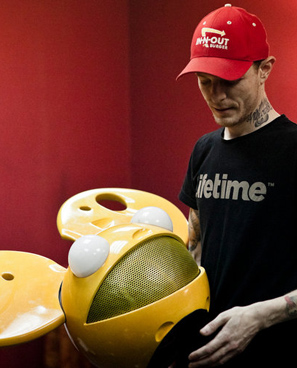 Heads N Stuff
"So am I living a dream? Or enduring a nightmare? I still can't decide... because the last thing I want, or anyone else wants, is to just fade out into obscurity over a period of time and then end up shit on by the people who are near me now. That's why i have 'fail' tattooed on the inside of my wrist... has a very profound meaning to me. Well, this is the short of it... another day approaches, and the pressure is more prevalent then it was the other day... I'm trying my best."
Advertisement:

A Canadian Electronic Music producer and icon, deadmau5 (pronounced "dead mouse") is easily one of the most popular electronic artists today. Getting his professional start in 2006 when he released his first full album, Get Scraped, he is best known for the songs "Faxing Berlin", "I Remember", "Ghosts 'n' Stuff", "Strobe", "Sofi Needs a Ladder", and "Raise Your Weapon", as well as for wearing his eponymau5 mau5head during live performances.

His stage name comes from an incident in which he found a dead mouse in his computer while replacing his video card - on the IRC channel he frequented, he became known as "that dead mouse guy" after recounting the incident, and decided to change his username to "deadmau5" as a joke. The name is spelled as it is because of the character limit for names on certain IRC servers (you can only fit eight and "deadmouse" is nine), with the "5" as the "s" on the end because it's cool.

Real name Joel Thomas Zimmerman, he was born on January 5, 1981, and raised in Niagara Falls, Ontario (though he considers his current city of residence, Toronto, his hometown). As a child, he had a hobby of tearing apart household electronics to figure out how they worked, which carried over to his later fascination with electronic music production - as opposed to solely using plugins and software to make his sounds (which he derisively calls "laptop music"), he uses huge racks of analog modular CV equipment

After dropping out of high school, doing many odd jobs over the years (including being contracted for an IT job for two years using only his own self-taught computer programming skills), and starting a design business on the side, all while producing music in his free time as a hobby, he found himself being paid to do music for advertising until he got discovered by DJ Chris Lake. This and the appearance of his first hit as deadmau5, "Faxing Berlin", on Pete Tong's radio show led to him being signed onto Ultra Records, later creating his own label, mau5trap, and thus becoming a hit electronic artist doing music full-time.

While known for his music and his mau5head image, he is also known for being one of the nerdiest musicians to ever exist, being extremely open with his fans, and causing controversy, usually by speaking what is exactly on his mind, PR and sugarcoating be damned. These, combined with his constant cursing, his sense of humor, his personal problems, and the tendency for people to take anything he says out of context, result in a rather interesting individual.