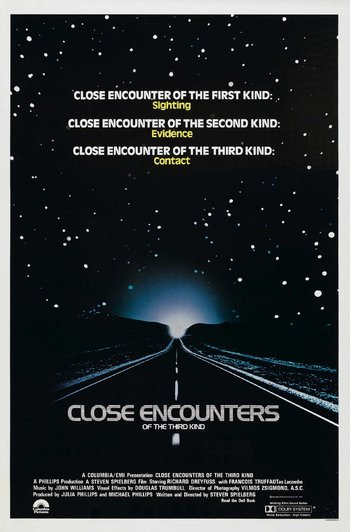 Close Encounters of the Third Kind is a 1977 science fiction filmnote Spielberg insisted it was "science fact" written and directed by Steven Spielberg, with a score by John Williams and special effects by Douglas Trumbull.

After a series of bizarre incidents where long-lost ships and aircraft begin reappearing in very unusual places around the world, a wide swath of the state of Indiana is buzzed by a very flashy troupe of UFOs. One of the many witnesses to this flyby is power-company employee Roy Neary (Richard Dreyfuss). Following the event, Neary is inflicted with visions of a distinctive-looking mountain. His family life quickly falls apart, and his wife Ronnie (Teri Garr) leaves him.

He eventually learns that what he has been seeing and obsessively sculpting is the Devil's Tower rock formation in Wyoming. He meets fellow witness Jillian Guiler (Melinda Dillon), a widowed mother desperately seeking her young son Barry, who has been carried away by the UFOs. They attempt to reach the Tower, even as the U.S. government, well aware of what is happening, concocts a biohazard scare involving the derailment of a train carrying nerve gas and places a military cordon around the site...

This film is one of only two in Spielberg's entire career for which he wrote the screenplay as well as directed, the other being A.I.: Artificial Intelligence. The original version was released in 1977; a "Special Edition" Re-Cut was released in 1980 after Spielberg had proven he was a serious director. (There had been Executive Meddling with the cut of the original, though entirely justified as the studio was going bankrupt and production had to be hastened.) Spielberg re-edited the film yet again for a "Collector's Edition" in 1998. All three cuts were included in the film's Blu-ray release in 2007, along with a new interview with Spielberg explaining the editing.

The title comes from UFOlogy, an encounter of the third kind being one in which the observer sees the aliens themselves as well as their craft.

François Truffaut, better known as a film director and a leader of the French New Wave, appears here as Lacombe, a scientist researching the UFOs who is sympathetic to Roy.

Close encounters of the third trope: