Literature / The Call of Cthulhu 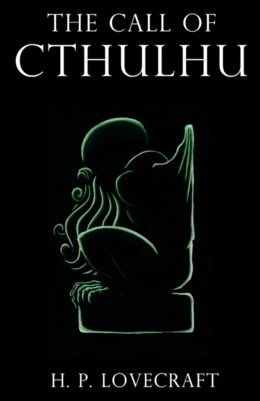 The most merciful thing in the world, I think, is the inability of the human mind to correlate all its contents. We live on a placid island of ignorance in the midst of black seas of infinity, and it was not meant that we should voyage far. The sciences, each straining in its own direction, have hitherto harmed us little; but some day the piecing together of dissociated knowledge will open up such terrifying vistas of reality, and of our frightful position therein, that we shall either Go Mad from the Revelation or flee from the deadly light into the peace and safety of a new dark age.
— Opening lines
Advertisement:

The Call of Cthulhu is arguably the most famous short story by horror writer H. P. Lovecraft. It is also the first story to refer to and the only piece written by Lovecraft himself to actually feature the famous Eldritch Abomination who would later name the Cthulhu Mythos as other writers took over.

The story is presented as a manuscript found among the belongings of the late Francis Wayland Thurston, which is used as a narrative which joins together three short stories, each bigger, darker, bleaker, and more memorable than the last. The first part begins with a document found by Thurston among the belongings of his late granduncle Professor Angell, which describes a series of conversations with a young sculptor named Henry Wilcox, who has been experiencing a series of strange dreams on March 1st 1925, which have inspired him to carve a disturbing bas-relief. Over the course of several weeks, Wilcox and Angell meet, and the former describes his bizarre dreams in which he finds himself exploring the ruins of an unknown forgotten city. The next part reveals why this is of interest to Professor Angell.

The second story tells of John Raymond Legrasse, a police officer in New Orleans whose investigation of a series of disappearances leads him to a rather sinister cult worshiping a strange idol. The cultists are immediately arrested and taken to prison and the idol is confiscated. Legrasse then shares the idol among various archaeologists, including Professor Angell, hoping to gain answers as to its nature. Eventually through one man's testimony and the questioning of some of the cultists, Legrasse learns that the idol is "Great Cthulhu", a being worshiped by this cult which has presumably lived for centuries.

In the third and final part of the story, Thurston encounters a newspaper clipping describing the rescue of the lone survivor of the crew of Emma, a Norwegian sailor named Gustaf Johansen. Thurston is eventually able to recover a journal Johansen wrote, which tells the tale of how he and his crew commandeered the yacht Alert from a particularly sinister crew of men (implied to be cultists), and their arrival at the sunken city of R'lyeh, where Cthulhu himself is nearly released by mistake.

Adapted in 2005 into a film by the HP Lovecraft Historical Society. There are also at least two radio adaptations; one by the Atlanta Radio Theater Company, and the other by Dark Adventure Radio Theatre. Dramatically read by Chilling Tales for Dark Nights

Not to be confused with the roleplaying game Call of Cthulhu, or the YouTube series Calls for Cthulhu. Or the Metallica song "Call of Ktulu" on Ride the Lightning.

The Call of Cthulhu is the Trope Namer for:

"The Tropes of Cthulhu":