Literature / The Cats of Ulthar 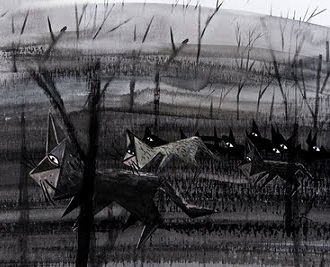 "In Ulthar, no man may kill a cat."
—Arc Words
Advertisement:

"The Cats of Ulthar" is a short story by H. P. Lovecraft.

This story is about how the town of Ulthar made the decision to forbid anyone from killing cats. The narrator recalls that in the time before the law was passed, there was an old cotter and his wife who trapped and killed their neighbors' cats. The villagers, too fearful to confront the old couple, decided to just keep their cats indoors and out of trouble.

Then, a caravan of strange travelers arrived one day to Ulthar. They were wearing strange clothes and performed foreign prayers that the villagers could not understand. Traveling with the wanderers was a small orphan boy named Menes and his pet kitten.

On the third day of the caravan's stay, Menes could not find his kitten. He searched through the whole village and eventually gave up and started crying. The villagers knew what had happened to Menes' cat, and took pity on him and told him of the cotter and his wife's cat-killing spree. Upon hearing of the old couple's violent acts towards cats, Menes stopped crying and invoked a prayer that made the clouds in the sky change form and darken with an unknown force.

The caravan left that night, never to be seen again, and the villagers returned to their homes to discover that all of the cats had disappeared from the entire village. The villagers assumed that the caravan had cursed them and stolen their cats in a fit of revenge, but by morning all the cats were back in the homes. Oddly, every cat was really fat, and they all refused to eat their food for days. A week later, a few villagers had noticed that the old cotter and his wife had not been seen at all, and that their house's lights were never lit. A few people got enough courage to confront them and visited the old couple's house, broke down the door, and went inside. All they found were a pair of skeletons on the ground, completely clean, flesh gnawed off the bone...

That law is mentioned in passing in Lovecraft's other Dreamworld stories. By the time Randolph Carter gets to Ulthar on his Dream-quest, the streets are full of happy, well-cared-for kitties.

). There is also a video game adaptation here

Tropes in "The Cats of Ulthar":