Was Once a Man 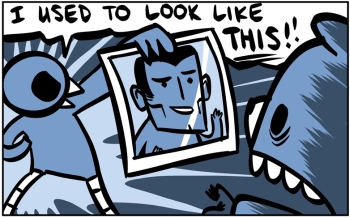 Monsters are pretty damn scary. Horrible, bug-eyed, slobbering, and in no way ever human. Therefore, it's all the more unsettling when it's revealed that a monstrous creature was once human, but became a monster through some sort of infection, curse, sheer personal evil or transformation and there's no means of changing them back.

Related to Body Horror and Face–Monster Turn, but distinct in that while Body Horror deals with the fact of the monstrosity itself and usually follows it from beginning to end, Was Once a Man is where a creature is monstrous when first introduced, but is either implied heavily or later revealed to have once been human.

Sometimes the mind is not affected; only the body is. If the mind is affected it might be a Pre-Insanity Reveal. Sometimes the original mind can be reached. This does not undermine the horror of it. Indeed, in certain ways, it makes the horror even worse.

In some cases, the person may actually like being transformed, and doesn't care about becoming human again. Instead, they are a Fully-Embraced Fiend. If they’re capable of speech, expect their response to being called by their old name to be a That Man Is Dead speech.

See also: Body Horror, And Then John Was a Zombie, Viral Transformation, The Virus, Tragic Monster, Stages of Monster Grief and Reforged into a Minion. Compare and contrast Uncanny Valley. Also contrast with Ascend to a Higher Plane of Existence, for a non-monstrous transformation.

This trope has nothing to do with Gender Bender. Not to be confused with Animorphism, Transflormation, or Baleful Polymorph, in which the thing that used to be a human is not a monster, although it can still be a Brown Note Being. Also do not confuse with a transgender woman.

Alternative Title(s): Was Once A Person, Was Once Human, Was Human Once