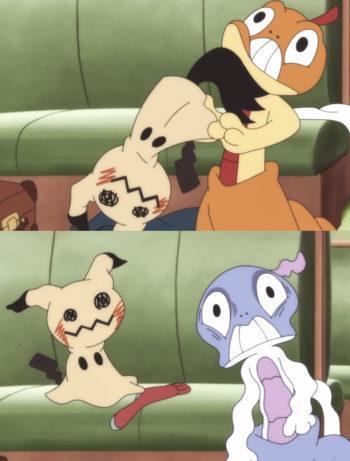 Mimikyu used Psychological Scarring. It was super effective!
"We still have no clue who we're dealing with...
Pam took a peek at him and her eyes burned out of her skull, and you want to have a face-to-face?"
— Sam Winchester, Supernatural "Lazarus Rising"
Advertisement:

When this being sings the blues, people get hurt, which is bad because it can't stop the music. Some quality intrinsic to this being's nature is harmful to those who sense it, named after the proverbial Brown Note whose sound triggers an audience to spontaneously lose control of their bowels.

One sight or sound from this creature turns you to stone, whitens your hair, ages you, leaves you paralyzed, blind, obsessed, insane, suicidal, or dead. Your eyeballs burst into flame, your eye color changes, or some other change to pupil or iris. Whatever the Brown Note effect is, it must be automatic, not a spell, device, or voluntary power. This trope is Older Than Feudalism, since it appears in the Classical Mythology (example: Enthralling Siren) of the Greeks and Romans, and also The Bible (example: Angelic Abomination).

More often than not, these characters or beings will be some variation of He Who Must Not Be Seen, with their true appearance deliberately kept a mystery as if it were the work's way of telling you to take its word for it, because you — the audience — do not want to make the mistake of laying eyes upon them. This can be a good way of preserving the being's "Nothing Is Scarier" factor inherent with not being able to see or even get close to it, especially if the work can't figure out how to reveal it without ruining it.

In games, such beings can increase difficulty. Sometimes a damaging being has a curative counterpart, whose presence is intrinsically helpful and healing. This trope is reserved for beings and not microbes.

This is a Sister Trope to Eldritch Abomination since they overlap but not always. Not every Eldritch Abomination causes a Brown Note. Not every being who causes a Brown Note is an abomination; other causes are curses, infections, mutations, The Corruption, or types of undead. Some fairy types can cause a Brown Note, as can some fantasy races with unknown, but not unknowable motives. A being who You Cannot Grasp the True Form of will cause this, if they don't take A Form You Are Comfortable With. This trope is a catchall for Brown Note creatures who are never identified.