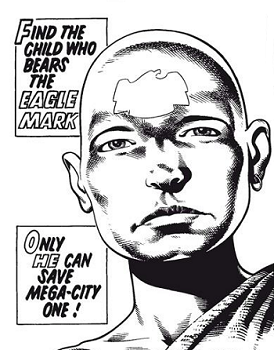 "That crest, which embodies the power of the Dragon God, is both honored and feared, and those who bear that crest on their forehead are without a doubt... Dragon Knights!"
— Nabara, Dragon Quest: The Adventure of Dai
Advertisement:

Vanquishing evil is actually pretty easy: just grab a Chosen One, give them a sword (or just a herring — Chosen Ones are a very resourceful lot), point them in the right direction and just wait until the evil empire falls. In fact, the only challenge in this puzzle is figuring out just who and where the Chosen One is in the first place. You don't want to end up with a Fake Ultimate Hero, after all.

For your convenience, the gods were nice enough to physically label your Chosen One in some way. Typically, this comes in the form of an unusually shaped birthmark or strange hair/eye color. For bonus points, there will often be a vague allusion to this mark or phenotype that will only make sense once the Chosen One actually appears.

A subtrope of Distinguishing Mark. Overlaps with Claimed by the Supernatural when the Chosen One is literally chosen by something, and Reincarnation-Identifying Trait if the Chosen One has equally noteworthy past lives.