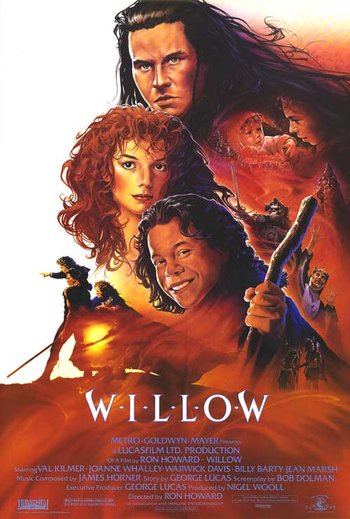 Willow is a 1988 Heroic Fantasy movie conceived and produced by George Lucas and directed by Ron Howard. The story is about a young farmer named Willow Ufgood (Warwick Davis), one of a Hobbit-like people called Nelwynns, who is drawn away from his sheltered home to save Elora Danan, a baby girl with a destiny, from the evil Queen Bavmorda (Jean Marsh) who would see her destroyed.

Willow is aided by the disillusioned swordsman Madmartigan (Val Kilmer), who has turned to a life of roguery, sorceress Fin Raziel (Patricia Hayes), who has been turned into a possum by Bavmorda, as well as two diminutive brownies Franjean and Rool (Rick Overton and Kevin Pollak). They are initially thwarted, but later joined, by the queen's daughter Sorsha (Joanne Whalley). As their journey continues, they face troubles and hardships beyond what any of them had imagined. Through it all, they find love, friendship, and wisdom. In the end we learn that the people we would never suspect are sometimes the bravest of all.

Notable for many reasons, including the use of dwarf actors as major characters, as well as being one of the breakout films for Val Kilmer (who played the Jerk with a Heart of Gold Madmartigan).

This film has had three game adaptations: one in 1988 by Mindscape for the Amiga, Atari ST and DOS; two in 1989 by Capcom for the Arcade and NES. The arcade game is a side-scrolling platform/action game where the player switches between Willow and Madmartigan, while the NES game is more of an Action RPG in the vein of The Legend of Zelda. The computer game is a collection of five minigames, all of them horrible.

There is also Chronicles Of The Shadow War, a trilogy of sequel novels by George Lucas and Chris Claremont. They do provide a great deal of additional Character Development, as well as Worldbuilding that the movie lacked.

In May 2019, a sequel in the form of a series has been confirmed to be in development for release on Disney+, and was formally announced in December 2020. It is set to be released sometime in 2022.