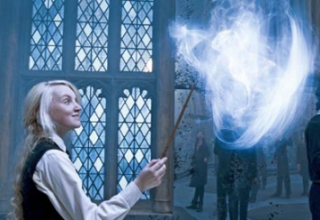 "Expecto Patronum!"
"Wands only look like they're too fragile to be deadly."
— Adventurer's Vault 2 on Wands
Advertisement:

The Magic Wand, the magician's all-purpose Weapon of Choice.

The Magic Wand is a unique weapon in that unlike swords, bows or guns, this weapon is generally not for use in physical combat, but is instead a purely magical weapon. In general, a Magic Wand is any device that enhances magic for producing spells, or aid in combat, or—less frequently—enables the use of magic in the first place. Circe used a Magic Wand to convert Odysseus's men to swine, thus making this one Older Than Feudalism.

When The Magic Wand is big or strong enough to be capable of both magic and melee combat a la Martial Arts Staff or Carry a Big Stick, the resulting hybrid-weapon is a Magic Staff.

If the wand in question appears on a fortune-telling card, it's Tarot Motifs—likely either the Magician or the Ace of Wands. Sometimes in Anime and Manga, a staff's powers will be tied to an onusa for use by Miko or onmyoji. These also tend to be more associated with fairies, especially Fairy Godmothers, than wizards.

Basic types of wands include:

Not to be confused with Magic Tool, which is a mundane implement that appears magically competent.