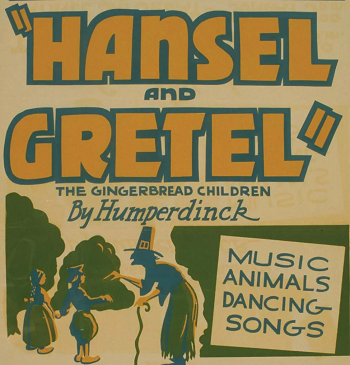 "When past bearing is our grief,
Then 'tis Heaven will send relief!"
Advertisement:

Hansel and Gretel (Hänsel und Gretel in the original German) is a three-act opera composed by Engelbert Humperdinck from a libretto by his sister Adelheid Wette. It is based on the Fairy Tale of the same name.

The titular characters are the son and daughter of an impoverished couple, Peter and Gertrud. After one too many shenanigans results in the loss of the milk they were supposed to have for supper, Gertrud sends Hansel and Gretel off to forage for food. A dismayed Peter informs her that the Gingerbread Witch steals children and turns them into gingerbread in her oven, and the parents set off to find their children.

Hansel and Gretel wander around the woods but are protected through the night by the Sandman and the Dewman, a pair of benevolent nature spirits. The next day, they happen upon the cottage of the Gingerbread Witch and wind up nibbling on it. The Witch catches the two, fattens Hansel up, and turns Gretel into her servant. However, the pair are able to throw her into her own oven and free the children she had previously captured. They are reunited with their parents, who remind them that God's grace delivers in times of need.

The opera first premiered in Weimar, Germany in 1893 and is frequently performed around the winter holiday season to this day.