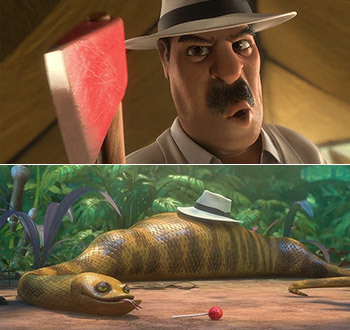 A villain ultimately finds their evil deeds come back to bite them. Literally—they end up getting eaten.

This does not include a Heroic Sacrifice. But may be subverted with a minor character being killed and eaten in obvious foreshadowing of what is going to happen to one of the bads at some point. While Mooks may be recipients of the Just Desserts, a true Just Dessert is reserved for those higher up the ladder. If the beast doing the eating was unleashed by the guy who gets eaten, he's been Hoist by His Own Petard, making him a Self-Disposing Villain. Bonus points if he made a practice of feeding people to said beast beforehand.

The trope name is a pun on the phrase "just deserts" (which means something bad that one deserves, hence the single 'S'). As you know, a dessert gets eaten at the end.

Compare Karmic Death, The Dog Bites Back, Devour the Dragon, Laser-Guided Karma. Also, see Exit, Pursued by a Bear where this trope is frequently implied.

WARNING: This is a Death Trope. Here Be Spoilers.

A octopus baddie gets turned into sushi!

A octopus baddie gets turned into sushi!