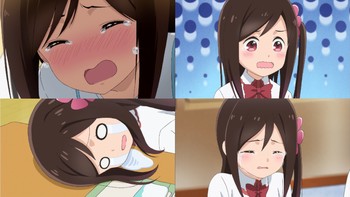 Bocchi just couldn't catch a break.
"I cry in the morning, I cry at night. I cry, cry, cry when I get a fright. I cry for my bottle, I cry for my doll. I cry-y-y, 'til they hear me call."
— Rocky, Sesame Street
Advertisement:

Some characters look like they're always ready to cry. In fact, they probably are and burst into tears on a regular basis. Sometimes, they will try to keep their emotions inside, but ultimately fail. One small incident and they are crying. It is possible for anything to cause them to cry, but it is most often a harsh insult directed at them.

There may be a few reasons for this behavior. They might just be super sensitive and emotional by nature. There might have been something in their past such as emotional abuse from peers or some other form of Break the Cutie that caused them to be this way. Jerkass characters such as The Bully will most likely try to make them cry, in which case the character may eventually force themselves to become desensitized towards insults.

This can go several ways; making the audience sympathetic, comedic exaggeration of realistic people, or triggering a sense of protectiveness. A Drama Queen tries to invoke sympathy but often ends up creating Wangst. Comedic examples are often the Butt-Monkey, as they are easy and amusing to abuse. Moe characters, such as the "Sad Girl In Snow", often prompt feelings of protectiveness both In-Universe and in audiences.

Most often female, though it can also be male (and is usually Played for Laughs if so). With male examples, this tends to be a sign of weakness, immaturity, or femininity, although it may also occur with an Emotional Bruiser who is prone to Manly Tears.

May overlap with Shrinking Violet, a character who is shy and insecure. Compare Cute Clumsy Girl, a similar character whose "flaw" is played for cuteness. Contrast Hair-Trigger Temper which is about characters being prone to anger. Compare Can't Take Criticism if the character is sensitive to criticism. See also The Eeyore, Broken Bird, and Nervous Wreck.