World in the Sky 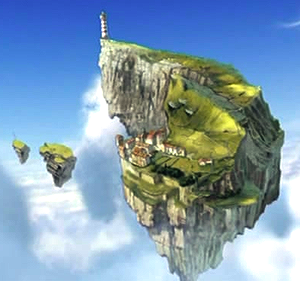 This is less a World Shape, and more a series of world pieces. Landmasses, with or without internal seas, float suspended in an atmosphere. They can range in size from tiny "islands" to huge continents with vast civilizations.

Impossiblenote or nearly impossible — see The Integral Trees under physics resembling ours, worlds of this type are usually found exclusively in fantasy. What keeps them hovering? Where does the gravity come from? What's keeping the atmosphere in place? What, if anything, is there at the "bottom" of these worlds? Nobody knows, but maybe A Wizard Did It. Do not expect the outcome of falling off the side of one of these pieces to be properly explored. Sci-fi versions will generally be landmass floating inside gas giant's atmosphere.

Sometimes, a World in the Sky may be placed above a more conventional world which, for whichever reason, is largely or entirely uninhabitable. In some cases, the World in the Sky may have been created or settled specifically to escape whatever made the original surface unsuitable for life. Other times, it may be in Another Dimension or an Elemental Plane where things don't work quite by the rules of regular physics.

In science fiction settings, this is often seen in the form of gas giants and of Venus-like worlds with thick atmospheres and unlivable surfaces. In these situations, mysteriously floating chunks of rock aren't generally an option and settlements chiefly consist of artificially built floating cities, usually held aloft by or outright built in giant balloons. In the case of gas giants, the question of the unseen surface world is answered by there not being one to begin with, just layers of increasingly toxic and pressurized gases.

Waterfalls endlessly pouring into the void are a popular visual touch. Don't bother asking how all that water is renewed or how it can fall off in such quantities without running out.

Travel is often by Cool Airship and Those Magnificent Flying Machines. Flying Seafood Specials and Living Gasbags will also be common sights in the skies of these worlds.

Compare Shattered World, for broken worlds IN SPACE!, and Floating Continent, which usually exists in a more normal world with people also living on the surface below. See also The Sky Is an Ocean, which is almost always used in worlds like these. See also Ocean Punk, for an actual ocean. This can sometimes be a post-apocalyptic Earth.

Hekseville is a floating city attacked to the World Pillar.

Hekseville is a floating city attacked to the World Pillar.