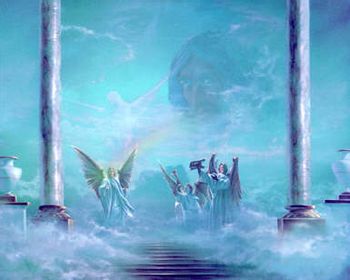 Today's weather will be partly cloudy with a chance of salvation.
Fluffy Cloud Heaven is taking millennia of belief and art on "Heaven", and boiling it down to a Hallmark card.
Advertisement:

Heaven takes place in the clouds, which are solid enough to walk on, and expect much Heavenly Blue. Besides the clouds, the landscape consists chiefly of white, fluted columns in a generic Greco-Roman style. Humans become angels after they die. They are given wings, a long white robe, a lyre/harp and a Holy Halo that is literally a golden glowing ring that floats over their heads. Smaller Super-Deformed cherubs à la Cupid may float around too.note These guys are really called putti and may represent (among other things) innocence and fun, or guardian spirits keeping an eye on things. Other than that, it's not exactly clear what people do. If God exists in Fluffy Cloud Heaven at all, he's a giant white-haired, bearded man wandering around or sitting on a huge white marble throne. There is often a line in front of the "Pearly Gates" of people wanting to get in (because Heaven itself can't find an efficient way to deal with a line of people), with St. Peter who stands in front of them and acts as a bouncer. He'll read his book about all the naughty and nice things someone has done, and then either let them in or send them to Hell via a trapdoor. Often he has a desk right in front of the gates. Sometimes there's even a computer on it.

Depending on the version, animals may be frolicking about, ready to meet their owners from when they were alive, or they might be waiting down at Rainbow Bridge.

Note that you probably won't find an Ophanim or Seraphim among the inhabitants; not that they're any less angelic than any of the other residents here, but more the fact that they don't quite fit the scenery. - Be not afraid, indeed!

Fluffy Cloud Heaven may be the home of Hollywood angels, who are less like something out of any established religion and more like fairy godmothers and godfathers. Some only offer banal homilies to their clients; others provide supernatural aid, but none of them smite the unrighteous, Old Testament style.

Don't expect to find this description in any religious text. Nowadays the use of this depiction is usually meant either as satire or for very young children. The exceptions almost invariably treat the depiction as a simple visual short-hand.

This is the most popular sub-trope of Heaven Above, which covers any association of the divine and the sky. See also the Hallmark version of Hell, Fire and Brimstone Hell. Not to be mistaken for Level in the Clouds, which may be fluffy but is still very terrestrial. Characters who die in a story often Died Happily Ever After before coming here. The destination when Winged Soul Flies Off at Death. We may also get to see some Celebrities Hang Out in Heaven.

As a side note, the actual origin of this depiction comes from Early Christians, many of whom were formerly of the Greek religion, conflating Heaven with Mount Olympus and angels with Apollo, god of light and music (hence why angels are often shown playing harps).

Of course we couldn't have gone for the
all-inclusive luxury pack at the other place,
being stuck in this one room, all clouds, no AC,
with grandma figurines playing instruments for the rest of eternity,
now that sounds much more fun.