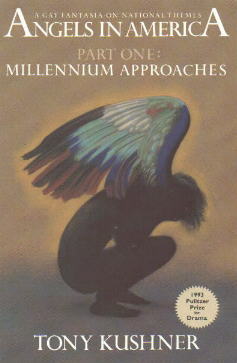 "Greetings, Prophet;
The Great Work begins:
The Messenger has arrived."
—The Angel
Advertisement:

Angels in America (subtitled A Gay Fantasia on National Themes) is a Pulitzer Prize- and Tony Award-winning play written by Tony Kushner. It is presented in two parts, Millennium Approaches and Perestroika, each of which runs roughly three hours long. The two parts premiered in California in 1991 and 1992, respectively, and were produced on Broadway together in 1993.

The play is set in New York City from the fall of 1985 into spring of 1986, during the rise of AIDS awareness, and focuses on an enormous variety of topics, from politics to religion to dysfunctional families. The main story line follows a young gay man named Prior Walter, who has just discovered he is HIV-positive. After subsequently being abandoned by his lover Louis, he receives a vision from Heaven, in which an Angel visits him. She tells him that Heaven once was a paradise, but that human progress creates "earthquakes" in Heaven and after a particularly severe one, God abandoned them. She compels him to go out into the world and tell his fellow humans to stop moving forward, so that God may return.

Tony Kushner specifically notes in the published versions of the script that any and all fantasy elements of the story should be performed as such, as full theatrical special effects. As such, between this and the play's sheer length and complexity, mounting a production is an incredibly daunting task, and productions are few and far between for a play of its notoriety.

A Mini Series based on the play aired on HBO in 2003, directed by Mike Nichols and starring Justin Kirk, Ben Shenkman, Emma Thompson, Al Pacino, Meryl Streep, Mary-Louise Parker, Patrick Wilson, and original cast member Jeffrey Wright. It went on to surpass Roots for most Emmys won by a program in a single year.

In 2017-2018 a revival of the play was staged in London before moving to Broadway, with cast that included Andrew Garfield as Prior Walter, Nathan Lane as Roy Cohn, and Russell Tovey / Lee Pace as Joe Pitt.

This play also has a character sheet.