All spoilers will be unmarked. You Have Been Warned! 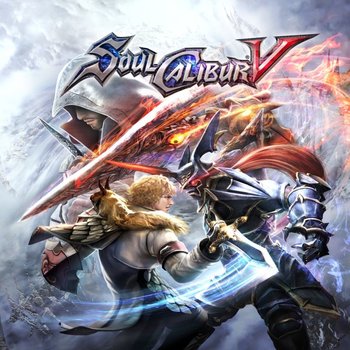 A new generation of Swords and Souls...
Advertisement:

Soulcalibur V is the sixth main installment of the Soul Series, released on January 31, 2012 for the seventh-gen consoles PlayStation 3 and Xbox 360.

Intended to be the first game in the series with a "canon" story-mode, the game is set seventeen years after the events of Soulcalibur IV, and features a cast of newcomers as well as a handful of returning favourites. It follows the misadventures of Patroklos Alexander and Pyrrha Alexandra — the son and daughter of the late Sophitia Alexandra, as they find themselves unwitting pawns in the clash between the Soul Edge and Soul Calibur. Unfortunately, the game was released in a unfinished state with only ¼ of the planned story mode finished, resulting in only a small number of finished cutscenes and the rest of the narrative being told through storyboards. A significant amount of DLC was released in the form of music from past games and costume parts for the game's robust Create-a-Soul system. This, coupled with the overall lack of features and many popular characters being excluded from the roster, resulted in an overall negative reception from fans.

After a series of lackluster spinoffs, in 2017 Soulcalibur VI was announced as an in-Continuity Reboot set during and after the events of the second game: Soulcalibur.