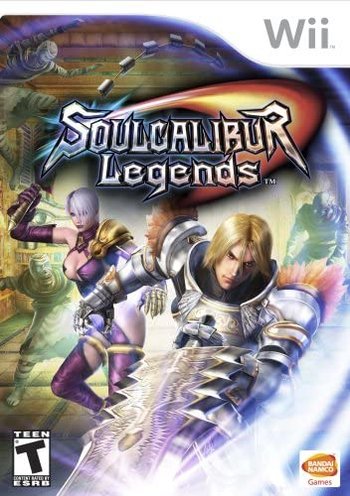 Soulcalibur Legends is an action-adventure spin-off of the Soul Series, developed by Project Soul and released for the Nintendo Wii in 2007. Notable in that it is the first non-fighting game of the series, the game is set in between the events of Soul Edge/Blade and Soulcalibur, chronicling Siegfried's early adventures as the host of Soul Edge prior to his transformation into Nightmare.

Playable characters include Siegfried Schtauffen, Ivy Valentine, Sophitia Alexandra, Astaroth α,note A prototype of the Astaroth seen in Soulcalibur. Mitsurugi, and Taki; with Lloyd Irving from Tales of Symphonia as a Guest Fighter.

The game was met with a mostly-negative reception, citing issues with the Wii Remote's controls and the narrative not meshing well with the rest of the series, and sold the poorest out of any game in the series; leading to it being declared non-canon by Project Soul. A manga adaptation was published by Kerokero Ace in 2008, but was mostly comedic in tone.