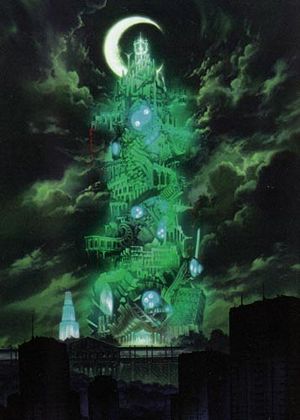 Apartments for rent: Reasonable rates, heating, electricity and water included, teeming with manifestations of humanity's tormentous thoughts and emotions. Enquire without.
"We're talking about a higher order of reality... The world they come from, the world I come from, has... more of everything. I don't think you understand yet; the light of Heaven would slash open your corneas. The music of Heaven would puncture your eardrums and drive you insane. The air of heaven would burst your lungs and boil your blood. Only spirit can bear Heaven's touch."
— Zauriel, Justice League of America
Advertisement:

In fictionland, some places just don't agree with the laws of physics, geography, and the way we understand the world.

These are usually depicted as bad places, but not always. The ones that aren't are usually sources of Surreal Humor.

If this place is a planet or country, then it will often feature an Alien Sky, as well as Mix-and-Match Critters or Starfish Aliens by the herd. Expect all geometries to be alien or sinister, and reality to be taking the day off. However, like any self-respecting Cosmic Horror Story, you can bet this is only a small part of its fundamental strangeness.

If it even exists in the same dimension as our Insignificant Little Blue Planet, chances are it's either outside the world entirely (and often accessible only by a Cool Gate), or located in a strange, unknown corner of the Earth. It may have never been seen by man before. If so, expect at least one character, upon seeing it, to widen his eyes and gasp: "What is this place?!"

The Big Bad may set up A Very Definitely Final Dungeon or an Amazing Technicolor Battlefield here. This kind of location ranks highly on the Sorting Algorithm of Threatening Geography, being a surreal land where things that should make sense don't and where the hero is definitely out of place. Conveniently for video games, this lets the developers set up gameplay challenges unconstrained by normal physics or geometries. A classic example is Super Mario 64, where the trope-naming Lethal Lava Land is only around halfway through and the final level is just an abstract set of platforms and structures hanging in the sky.

See also Genius Loci, Garden of Evil, Ominous Floating Castle, World Tree, Hyperspace Is a Scary Place, Bigger on the Inside, Year Inside, Hour Outside, Journey to the Center of the Mind, Ominous Clouds, and Void Between the Worlds.

Some common settings, such as the Sugar Bowl, can fall right into this trope if you think about them enough. Reality Is Out to Lunch will generally be in full effect here.