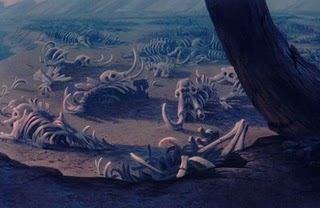 The Elephant Graveyard is a legend regarding a place where elephants instinctively go when nearing the end of their days. It was often featured in stories where an Evil Poacher or Great White Hunter would look for this place, seeking to claim its stores of ivory, and the protagonist would have to protect this sacred place (which does lead to some interesting Fridge Logic— wouldn't getting ivory from already-dead elephants be better than killing them?).

It also makes a very impressive and gloomy set piece, as your heroes walk in-between the giant skeletons. Besides the protagonists, of course, it's rare for any other living animals to be in such a place. If they are, however, expect nasty scavenging creatures, like vultures or hyenas, or even post apocalyptic dogs.

The origin of the trope is not certain. While elephants do not "look" for a place to die, they will gather around sources of food and water during periods of famine, and, as those get depleted, die there. It is also noted that older elephants whose teeth have worn out seek out soft water plants and eventually die near watering holes (more like a retirement community than a graveyard), perhaps also causing this myth.

Another possible reason is that elephants (and Clever Crows) are the only non-hominids to have shown death rituals. Elephants recognize elephant skeletons for what they are, and will rub the bones with their trunks. Elephants unrelated to the deceased have been noted to visit the graves. They also sometimes treat human bodies and skeletons with odd respect. The Other Wiki goes into further detail on this.

In speculative fiction, it's not uncommon for elephant to be substituted for some very big fantastical creature, giving us "Dragon Graveyards" or "Space Whale Graveyards" and similar things. In a Prehistoria, Lost World or 1 Million B.C.-type setting, a "Dinosaur Graveyard" is likely to make an appearance.

Contrast with Derelict Graveyard, the machine counterpart. Contrast Beware the Skull Base which takes this concept and applies it to a single skull shaped formation. See also Creepy Cemetery.