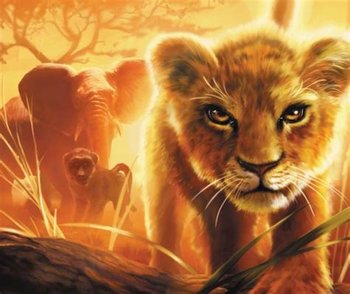 Bravelands is an ongoing book series by Erin Hunter, starring African wildlife. It's more similar to Seeker Bears than Warrior Cats and Survivor Dogs in that it stars several species of animals together. The first book, Broken Pride, was published in 2017.

A lion named Gallant is killed by a group of rival lions, led by Titan. Gallant's young son, Fearless, runs away and ends up snatched by an eagle. He is rescued by a troop of baboons, who decide that he is a good omen and decide to keep him. However, after their leader is killed, Fearless is kicked out of the troop. He returns to his pride, now ruled by Titan, and finds out that his now-blind mother, Swift, is in danger of being kicked out. After Titan's son, Ruthless, is kidnapped by cheetahs, Fearless strikes a deal with Titan to allow his mother to stay in the pride in exchange for rescuing his son.

The two other main characters are an elephant named Sky Strider, who can see prophecies as well as being able to read animal bones, and a baboon named Thorn, a low-class Deeproot who wants to become a part of the Highleaf caste. Thorn is in love with a female named Berry, but he can't court her until he moves up in his colony.

No relation to the Russian videogame series Braveland.