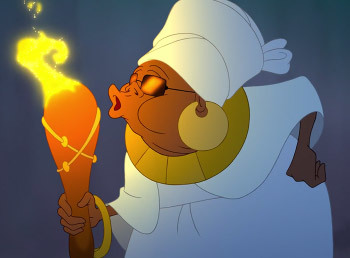 Not bad for a 197-year old blind lady, huh?
"What we have here, [Moist] told himself, is a Mk1 Feisty Old Lady: Turkey neck, embarrassing sense of humour, a gleeful pleasure in mild cruelty, direct way of speaking that flirts with rudeness and, more importantly, also flirts with flirting. Likes to think she's no 'lady'. Game for anything that doesn't carry the risk of falling over and with a look in her eye that says 'I can do what I like because I am old. And I have a soft spot for rascals.' Old ladies like that were hard to fool, but there was no need to."
— Making Money
Advertisement:

Much like its Spear Counterpart the Cool Old Guy, the Cool Old Lady is a character that's much older than the main cast but for whatever reason, they become deeply attached to her. She can be a "hip" grandma that rollerblades, bungee jumps, can speak the teenage slang without it coming across as Totally Radical, an Apron Matron who's gruff but caring, or a Cloudcuckoo Lander who is a joy to have around. Or she could be a kindly old lady who obviously led a very rich life (when she was younger, she bungee jumped, rode a motorcycle, knows the teenage slang of her era but doesn't dare try to incorporate it into her current speech) and regales the cast with saucy stories of her escapades. The fact that she's survived doing all that and lived to that age tells you that you should Never Mess with Granny.

If the grandma did all the cool stuff in the past, expect her to be low on the Sorting Algorithm of Mortality; on more dramatic shows, she will die by episode's/story arc's end. Often, she is helping all her new younger friends come to terms with their grief while being rather at peace with it herself because she "led a good life".

See also My Grandma Can Do Better Than You: For when Grandma is not so cool, and this fact is used to insult someone else by implying they are even worse.

Compare Mrs. Claus. Not to be confused with My Old Lady, a film starring Kevin Kline.

Head of the FBC Operations division, and a member of Trench's inner circle. She's universally recognized as one of the biggest badasses in the Bureau, and is responsible for overseeing the teams that deal with paranatural events. Before becoming part of the FBC, Marshall worked as a CIA agent.

Head of the FBC Operations division, and a member of Trench's inner circle. She's universally recognized as one of the biggest badasses in the Bureau, and is responsible for overseeing the teams that deal with paranatural events. Before becoming part of the FBC, Marshall worked as a CIA agent.