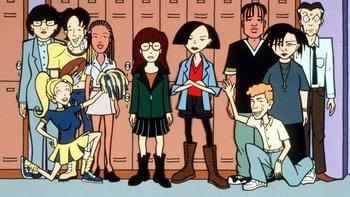 Daria is an animated High School Dramedy about a waifish, sardonic teen girl with coke-bottle glasses, army boots, and absolutely no patience for the idiocy around her. (She used to have Beavis and Butt-Head for classmates, so can you blame her?)

Most of the humor is derived from Daria and her friend Jane's conflicts with the collection of twisted teenage archetypes (and often the adults) around them. The last two seasons departed from the Reset Button to create a powerful Story Arc of Daria and her friends coming of age. The show's strong use of Character Development became a major draw on a network loaded with more superficial programming. A major part of it is Daria eventually falling for a Tall, Dark, and Snarky boy, Tom Sloane, and struggling to deal with romantic activities she previously rejected.

A Spin-Off from Beavis and Butt-Head, though oddly not from show creator Mike Judge. Rather, a few of his staff came to like the character and asked to use her. He granted permission, but was otherwise uninvolved with the show. Daria became a quintessential part of The '90s in television.

Approximately eight years after the finale, the show finally got an official DVD release on May 11, 2010. The five seasons are also available to watch on Paramount+.

CollegeHumor made a fake trailer

In June 2018, MTV announced that a reboot of the series tentatively entitled Daria & Jodie would be offered to streaming services. A year later, the show's title changed into Jodie, which will be the first of planned spinoffs

. Tracee Ellis Ross will be voicing the title character and also be its executive producer. The spin-off was picked up and set to air on Comedy Central, but in 2022 the project is now an animated film set to air