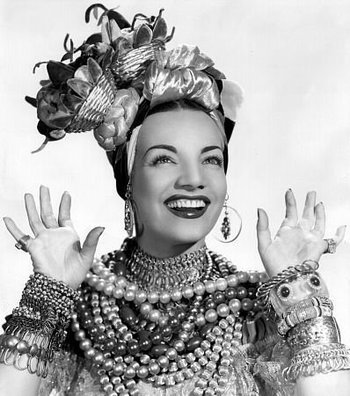 "Carmen Miranda, Carmen Miranda
Was she a dancer? Was she a singer?
No one knows, they just remember the fruit."
— Carter Pewterschmidt, Family Guy
Advertisement:

Miranda, a native Portuguese, came to Brazil in 1910 and became a popular radio star there in the 1920s. She entered film in the '30s and made her Hollywood debut in 1940 with Down Argentine Way. She was at least partially responsible for popularizing Samba and platform shoes in the United States, and by 1945 was the highest-paid woman in Hollywood.

Despite her lively, fun, and vibrant image, her personal life was a great deal more tempestuous. An unhappy marriage and an addiction to alcohol and barbiturates would ultimately contribute to her premature death in 1955 of pre-eclampsia.