You Need to Get Laid 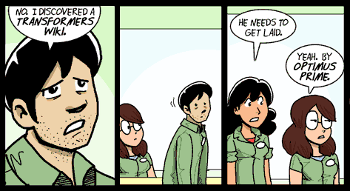 "Tuvok, I understand
You are a Vulcan man
You have just gone without
For seven years... about!"
— The Doctor (sung to La donna è mobile), Star Trek: Voyager, "Tinker, Tailor, Doctor, Spy"
Advertisement:

This trope occurs when one character strongly suggests to another to go out and do some dancing. And not just any dancing, but something along the lines of the "Horizontal Mambo", a "Dance With No Pants" if you will, in order to find release for some of their pent-up tension, if you know what we mean.

Sometimes said by one friend to another who seems too engrossed in their hobbies or whatever, it is similar in sentiment to "You need a girlfriend/boyfriend", and is the standard response to geeks being geeky. This often sounds patronizing due to the implication that the person's problems only exist because of their raging hormones and that a good roll in the hay will miraculously solve everything and make them a better person to boot because Sex Is Good and what they're doing isn't. It can very easily carry a wide variety of baggage. And that's not even speaking of the existence of asexuality.

A slight variation of the concept features trying to hook them up with another person in the hopes that the above will occur on its own instead of stating it outright. Taking this trope to its extreme can result in Pity Sex.

When the person literally needs to get laid, this is Mate or Die.

Compare Why Don't You Marry It?, Sex as Rite-of-Passage, Nerds Are Virgins and Intimate Psychotherapy. Contrast Did You Just Have Sex?. Truly sadistic authors may combine this with Can't Have Sex, Ever for a variety of comedic, dramatic, or even tragic effects depending on whether the one speaking is being deliberately vicious or is merely ignorant of the other person's situation, and on how the one being teased takes it.