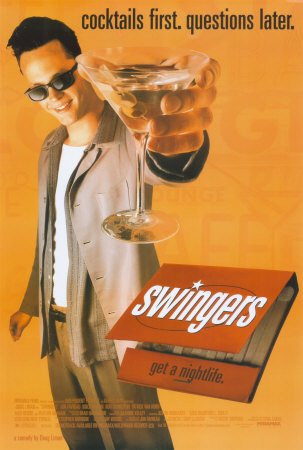 Swingers is a 1996 romantic comedy directed by Doug Liman, starring Jon Favreau, Vince Vaughn, and Ron Livingston (otherwise known as "that guy from Office Space") as three young actors living in Los Angeles in the mid-90s, generally hanging around and struggling to get their careers and personal lives going, all set against the backdrop of the brief swing music revival trend of the era (not polyamory).

Favreau plays Mike, an aspiring comic from New York who has moved to Los Angeles in pursuit of a career after being dumped by his longtime girlfriend at home and has been in a romantic slump ever since he arrived, and Vaughn is Trent, his cocky, charismatic, and occasionally obnoxious party animal of a best friend. Also part of their circle are Rob (Livingston), an aspiring actor having trouble finding a gig better than dressing as a cartoon character at Disneyland, Sue (Patrick Van Horn), whose name was inspired by his parents' love of the Johnny Cash song, and Charles (Alex Desert).

The film begins with Trent persuading Mikey to take a road trip to Las Vegas, during which he quickly loses most of his rent money for the month in a futile attempt to impress a woman; Trent is more successful and manages to pick up a cocktail waitress working at the casino. After the pair returns to L.A., more adventures in the same vein follow, with Mike and friends going out to various clubs and parties around L.A. and trying (mostly unsuccessfully) to be cool and meet women. Eventually, things start to turn around for Mike romantically, if not professionally.

The movie is considered a Cult Classic by many and is much-loved for its likable characters and extremely quotable screenplay. It was the first major success for Favreau, Vaughn and Liman and sent them on to the successful careers they continue to enjoy today.