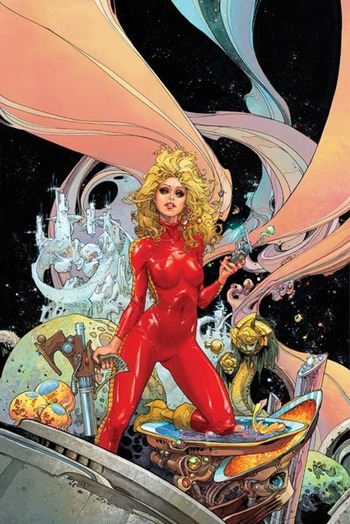 Barbarella is a French comic book character created by Jean-Claude Forest for the French V Magazine. In 1964, her strips were collected in a single book, Barbarella, touted as France's first "adult" comic book. This book ended up inspiring the cult-classic 1968 film with Jane Fonda.
Advertisement:

Some years later, Forest produced three more albums, The Wrath of the Minute-Eaters, The False Moon, and The Storm Mirror. Another strip was produced for the Someday Funnies anthology, which languished in Development Hell until the New Tens.

In 2017, Dynamite Comics acquired the rights to produce a new ongoing series.

The Original Strips
The Dynamite Series