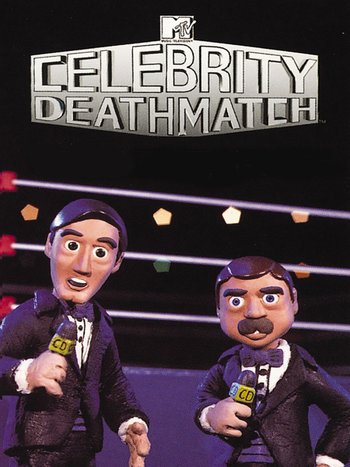 "Let's get it on!"
— Mills Lane, referee
Advertisement:

Celebrity Deathmatch is a 1998 claymation animation series broadcast on MTV.

The concept behind this show is that celebrities would fight each other to the death in the ring, claymation-style.

The show first premiered on MTV's 1997 animation show, Cartoon Sushi, with Marilyn Manson killing Charles Manson by ripping his skeleton out through his mouth. After it became a success, "Deathbowl 98" was released and shown during the Super Bowl XXXII halftime show. Eventually, it began running as a weekly series first on MTV from 1998 to 2002, then Uncanceled to MTV2 for two more seasons in 2006 and 2007. After an eight-year hiatus, MTV2 announced on April 2015

that the show would be uncancelled for a second time, and unlike the previous uncancellation, series creator Eric Fogel will be involved this time around. Unfortunately, in November of 2016 Fogel announced via Twitter that MTV had ceased production on the re-boot for unknown reasons. Then in December of 2018 Ice Cube announced he would be producing a revival in association with MTV as part of a plan to reboot numerous properties

There was also a fighting game released for the PlayStation, PlayStation 2, Xbox, and Windows PCs. It was also planned for a GameCube release.

No tropes were harmed in the making of this page. Anyway, they're just words:

open/close all folders
A-F
G-M
Advertisement:
N-T
"Thanks for the snack. What a swell treat for Shaq."
"Glass in my eyes, a nasty surprise!"
U-Z

When Johnny Gomez reveals John Tesh murdering Bob Costas, Tesh would've gotten away with it if it weren't for the former and Nick Diamond, meddling sportscasters.

Example of:
You Meddling Kids

When Johnny Gomez reveals John Tesh murdering Bob Costas, Tesh would've gotten away with it if it weren't for the former and Nick Diamond, meddling sportscasters.