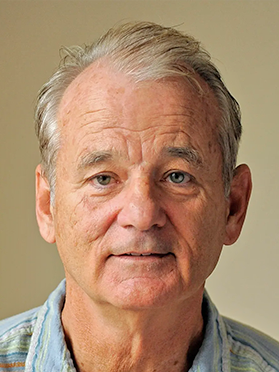 "Bill Murray, the SNL stand-out, the Ghostbuster, the weatherman who shouldn't forget his booties because it's cooooold out there today, who became the world's favorite uncle. The huggable hangdog with a twinkle in his eye that could start the next big bang. In recent years, he took on another face, morphing from a movie star into a puckish figure, randomly interjecting himself into the days of regular people like us; scene-stealing cameos in the poorly-reviewed, repetitively-structured films of our lives."
— Stuart Millard, The Legend of Bill Murray
Advertisement:

William James Murray (born September 21, 1950) is an American actor and comedian. From growing up in the Chicago satellite community of Wilmette, Illinois, he gained national exposure on Saturday Night Live after Chevy Chase left in the middle of season two and Lorne Michaels hired Murray as Chase's replacement. Though he is now considered one of the best cast members SNL has ever had, Murray was originally dismissed by fans as a weak replacement for Chevy Chase. When Chase came back to host on the show's third season, he and Murray got into a vicious fight backstage and had to be pulled apart by fellow cast members Dan Aykroyd and John Belushi. When Chase came back to host during the show's fifth season, the two did a monologue together showing that all was forgiven. In fact, Chase and Murray were the first choices to play Otter and Boon, respectively, in Animal House. Among his most popular characters on the show was singing Lounge Lizard Nick Winters with his most famous sketch the one where he sings the Star Wars theme with added lyrics: Star Wars … nothing but Star Wars …

Murray went on to star in a number of critically and commercially successful comedic films including Stripes, Tootsie, Meatballs, Caddyshack, both Ghostbusters (1984), and Groundhog Day. He also co-directed and starred in Quick Change, to date his only official directorial credit.

He gained additional critical acclaim later in his career, starring in Lost in Translation, for which he was nominated for an Academy Award, and a series of films directed by Wes Anderson, including Rushmore, The Royal Tenenbaums, The Life Aquatic with Steve Zissou, Fantastic Mr. Fox and Moonrise Kingdom. He is widely regarded as one of the most talented and unique comedic actors of his generation. His brother, Brian Doyle-Murray, was also a Saturday Night Live cast member and was in a few movies with his brother. Brothers John Murray and Joel Murray haven't been on SNL but did appear with their elder brothers in Scrooged.

Has developed a habit in his golden years of resurfacing in the strangest places. May or may not be a shape-shifting coyote trickster god.