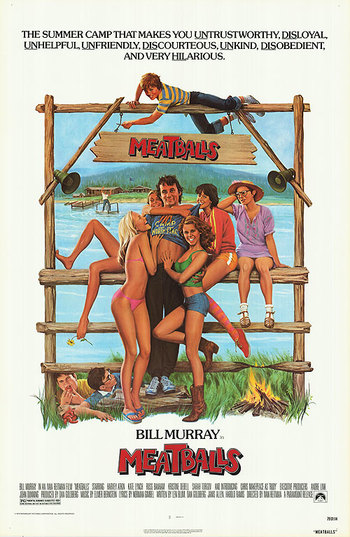 The Meatballs franchise is a series of comedy films revolving around teenagers attending summer camp, and getting into all sorts of crazy shenanigans at the behest of rebellious authority figures.

The series originated as a 1979 film directed by Ivan Reitman and starring Bill Murray. Rudy Gerner (Chris Makepeace) is sent to a summer camp, North Star, by his overbearing father, where he meets a motley crew of other teenagers being led by head counselor Tripper Harrison (Murray). Harrison is the head of a group of councillors-in-training at the camp, and takes every opportunity to make practical jokes at the expense of the other employees.

Over the course of the summer, Rudy and Tripper bond, while several of the other teens get into hilarious situations and relationships. The summer culminates in a competition against a rival camp, Mohawk, who are trying to defend their undefeated record in various sports. Tripper subsequently leads the teens to victory by inspiring them... even if it doesn't matter in the end.

The film was followed by several sequels (most In Name Only), none of which featured Murray or any of the rest of the original cast: